The President of the European Parliament, Ursula von der Leyen, has gone ahead with an ambitious legislative, economic, and political agenda to push Europe to the forefront in the struggle against climate change. The initiative is called The European Green Deal and is analogous to the New Green Deal, put forward by U.S. Congresswoman Alexandria Ocasio-Cortez and Senator Ed Markey last spring. She compared it to the U.S. effort to put a man on the moon in the 1960’s.

I recommend reading the full text of the proposal which is available here in order to get a sense of the full scope of the European Parliament’s ambition. Overall, the idea is to make the EU climate neutral by 2050. The proposal covers all of our modern society including products and packaging, buildings, industry and transportation in addition to energy which is a critical part of the initiative.

To actually make it happen, Ms. von der Leyen, has asked the chamber’s Vice President, Dutch Socialist, Frans Timmermans to lead the effort. Timmermans is a good choice because ti will be very difficult to get all of the 28 member states to agree to the proposal and he has a deep diplomatic background. It is hard to see how Poland will agree, for example, to phase out coal and lignite which represent more than three quarters of the country’s energy mix.

Another international issue is that he proposal aims to re-boot Europe’s carbon trading mechanism by enacting legislation to impose a carbon tax at Europe’s border on those countries and products which threaten its integrity. This issue is often referred to as carbon leakage. What this means is that if Europe imposes a real price on carbon of say, €50/Ton, then carbon heavy industries would lose competitiveness compared to imported goods which pay little or nothing.

Importing bricks or cement, for example, from Asia or Latin America is environmentally silly but would be profitable if there was a real, enforced cost on European manufacturers and nothing on the imported goods. Not only would the bricks and cement likely be made with an even higher carbon footprint  but would then have to be shipped halfway around the world.

What the European Green Deal envisions is an economic penalty for such behavior which will allow the European regulator to apply stricter carbon controls across the board in Europe and thus stimulate the carbon trading scheme.

Perhaps the most daring part of the proposal is to set a target of € 260 billion per year to actually make it happen. Ms. von der Leyen’s point is this is only 1.8% of the European economy and well worth it to solve the problem. The issue is how to actually get the money.

The proposal specifically mentions tying europe’s agricultural subsidies to progress on climate change and proposes a number of other mechanisms to use activate both public and private money. 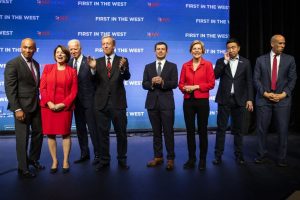 Personally I think the initiative is terrific in its scope and ambition but does fall on the heels of a disappointing COP 25 in Madrid last week. The good news is that if the Democrats do win in 2020, and I know that will be difficult, then the United States will likely pass its own Green Deal. China is already moving full speed ahead with its own environmental program and if all three of the world’s major regions embrace a low carbon future, then it might actually happen in time to avoid the worst consequences of climate change.

Another thought is that perhaps the European Green Deal is the mechanism that Europe will use to abandon the economic austerity of the last 12 years. A huge injection of money to re-build europe’s energy infrastructure, make its buildings ecological efficient, and make its cities the smartest and most efficient in the world, would do wonders for the economy in general.