The outbreak of a new strain of coronavirus in the Chinese city of Wuhan has, like a stone thrown into a pond, created ripples across China and the world. As I said in an interview on Yahoo Finance last week, everything is connected and what happens in China over the next few weeks will have impacts all over the world.

The first thing to understand is how large Wuhan and the surrounding Hubei province actually are. Wuhan itself has a population of 11 million people. It is strategically located on one of China’s two great rivers, the Yangstze, 500 miles upriver from Shanghai and the same distance downriver from Chongqing, which has 30 million people in its sprawling metropolitan area.

To give a sense of the size of the city’s industrial base, Dong Feng, Honda, Renault,  PSA and others built almost two million cars there in 2018 and it is also a center for China’s growing electric vehicle sector. Many of the car factories happened to be closed for vacations when the outbreak hit but they will need to come back on line soon in order to avoid serious disruptions. You can read a profile of Wuhan published by the New York times here.

The second critical aspect is that the outbreak occurred just at the start of China’s spring travel season that happens a few weeks before the lunar new year (Jan 25th). Each year, Chinese people take literally billions of  trips during the period to either go home to visit family or go away on vacation. China isolated the virus, called 2019-nCoV, on January 7th and then went on to seal off much of Hubei province on January 23rd affecting tens of millions of people in Wuhan and Hubei province.

To put the crisis in perspective, imagine that Chicago and most of Illinois was under lock down during the Thanksgiving holiday and then multiply everything by 5!

As I write this post, airlines all over the world are suspending flights to China, businesses are cancelling or postponing plans and CNN is reporting that the virus may have a very negative impact on the Chinese economy which it called “very fragile”. The IMF had raised its 2020 growth projection for China to 6% after the signing of the phase I trade pact with the United States but the outbreak and the steps taken to contain it will certainly take a toll. 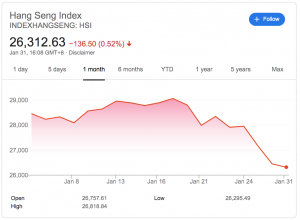 A further slowdown in China will ripple across the world’s economy and it has already hit global stock markets. How much and how far is anybody’s guess but the important thing is to realize how interconnected the world has become.

The Chinese authorities are building hospitals at record speed and say they have deployed military medical staff to Hubei. For an update from China itself, I recommend looking at the country’s official news agency here. Not everyone, of course, believe the Chinese news outlets. One of my students from Taiwan, for example, is understandably skeptical. For a critical view of the information, President Xi and China’s handling of the situation you can look at an article in The National Review by an analyst with the American Enterprise Institute.

What I see is most public health officials and corporate leaders taking a cautious approach and concentrating on keeping their own people and the general public safe. The problem will be if these kind of measures provoke fear, panic and even a xenophobic reaction towards ethnic Chinese – regardless of where they have been.

What I do not see, at least so far, is the virus provoking a major change in China’s trajectory or the leadership of President Xi and the Communist Party.

2 thoughts on “Everything is connected”