The virus, now officially known as SARS-CoV-2, and the deadly variant of pneumonia it can cause is a challenge for all of us. At IESE, we have been trying to help and have launched a series of free webinars on the schools’ Linked-In feed for alumni and anyone else who is interested in the managerial implications of the crisis. You can also find information and links to the series of webinars here.

Beyond the medical emergency, governments around the world have taken extraordinary measures to slow down the spread of the virus and to flatten the spread of transmission in order to avoid overwhelming the health care system and causing even more loss of life. Those measures, such as the declaration of the State of Alarm here in Spain, are causing in turn economic and social impacts which may prove to be equally or even more devastating as time goes by. 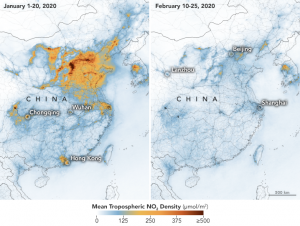 While all of this is going on, there is another emerging story about the impact that this forced hiatus is having on the natural world. A few weeks ago, NASA published satellite images of the concentration of nitrous oxide over China showing how the combination of the Chinese New Year Holiday and the emergency measures taken in Hubei province had a positive impact on this kind of air pollution. Another report, by Carbon Brief, found that the quarantine period temporarily cut China’s CO2 emissions by 25 % and projected that the global impact could be significant this year.

I do not, of course, suggest that any environmental benefit due to the outbreak can make up for the loss of human life and economic hardship that has and will occur. Instead, what I do find significant is the speed at which curbing pollution can have on air quality and the world’s carbon footprint.

I trust that a combination of reasonable public policy, the good sense of the world’s citizens and the heroic efforts of health care workers will get us through the current crisis. While the economic impact will probably be felt for some time, that too will pass.

The deeper question is what will the world learn from this crisis?

One thing will be to actually develop a permanent and effective infrastructure to deal with the next outbreak of the kind recommended by Bill Gates in his prescient Ted Talk from 2015.

The other could be to finally get serious about ushering in a transition to a new energy mix taking advantage of the dramatic fall in the cost of wind and solar power at scale. The chart below was developed by Lazard last year shows how competitive these technologies have become competitive with coal and gas over the last few years.

In 2012, the British comedian and author Ben Elton published a novel called This Other Eden which deals with the environment and what would happen to the planet if we stopped polluting it. Once all of this is over I hope the world can look at the positive environmental impact it has had and accelerate the transformation of the energy sector.