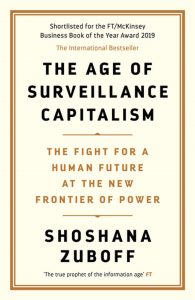 As I have written before, I consider myself and my family very fortunate during the current emergency as we have time for some things which normally get pushed to the side. One thing I have managed to do over the last few weeks is to finish Shoshanna Zuboff’s book, The Age of Surveillance Capitalism. In my view, the book is a towering achievement. Zuboff’s scholarship is only surpassed by her vision and writing ability. I have recommended the book to all of my MBA students and a number of friends and relations.

In essence, Professor Zuboff identifies Google, Facebook, and many other companies in what many call the “technology” space as a new kind of capitalist entity much like the Ford Motor Company and others were in the last century. What she attempts to do in the books 525 pages is to describe this new approach and to reflect upon its philosophical and scientific underpinnings and even speculate on the broader implications it has for society.

The focus of Zuboff’s formidable intellect is the data mining capabilities these firms have developed and their ability to not only predict human behaviour at scale but also to modify what people do and even what they think. She gives a framework in which to understand how phenomena like fake news have become such a problem and also to understand the importance of the General Data Protection Regulation that has been deployed here in Europe.

The most important take away I have had from reading the book is the realization that I had got things backward. In my head, google, Facebook and a large number of smaller companies had developed a bunch of really cool applications and devices that appealed to people and made our complicated lives both easier and more connected. Amazon’s home assistant, Alexa, comes to mind. They then found that by analyzing our use of these products, they could, to a limited degree, predict our behavior and sell that insight for cash to fund even more cool stuff.

What professor Zuboff demonstrates, in tremendous detail, is that the whole story is, in fact, the other way around. For her, the imperative of these companies is to capture what she calls the behavioral surplus that using these products create. The surplus is the goal and the products, from a thermostat to a smart vacuum cleaner or talking doll, are just means to an end. In her description consumers have become unwitting dupes in an attempt to learn more about us to influence our collective and individual behavior.

Professor Zuboff also poses even more disturbing questions about the end result of all of this innovation and what it means for civil society in general and individual freedom in particular. Some might find her vision of the future apocalyptic or exaggerated but I urge you to read it for yourself and make up your own mind.

What most disturbs me is the link between the dystopian future that Zuboff articulates and the increased digitalization that we are experiencing due to the spread of SARS-Cov-2.