Skip to content
By Mike Rosenberg
As a direct result of the economic impact of the measures taken to flatten the curve of infections of SARS-CoV-2, millions of people around the world have been fired, laid off, or furloughed. This can be a very traumatic experience. 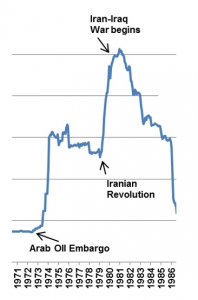 The first time I was fired was in Houston Texas in 1985.  I was an engineer working for a company that built and managed offshore oil drilling platforms and semi-submersibles and my most recent assignment was a construction project in Japan. Although I was not the best engineer in the team and made some big mistakes, the experience was positive for me. The problem was that the price of oil had dropped from $28 per Barrel to 8 in the Spring of 1985 and by late July the company decided to lay off  20% of its engineering team. When I returned to Houston in August, I was politely told that I was part of the 20%, given a very small check,  and sent to an outplacement class. That experience led directly to my coming to Spain to pursue my MBA, meeting the mother of my children and pushed me on a completely different track which I have never regretted. They say that everything happens for a reason and I know now that I would never have been an outstanding engineer. While we never know what might have been, none of the most wonderful aspects of my adult life would not have happened if I had not been fired in the summer of 1985. While I know how painful such a situation can be, if it has happened to you, it is essential that you reflect upon the reasons that have caused the situation. Did you lose your job, for example, due to SARS-Cov-2 or some other economic or strategic issues facing the industry or the company? Was it, on the other hand, due to interpersonal issues of one kind or another. Perhaps you were just not that good at what you were doing or did not keep up with what was happening either politically or technically? In the first case there is a tendency to lash out at the invisible powers of the world. If you look a bit deeper, on the other hand, you might see that you could have guessed that something was going wrong and taken steps to prepare yourself for such an eventuality or even to bail out and do something else. In the second instance you also might be tempted to blame a certain person who never liked you or got in your way. Again, I often find that a deeper analysis can teach us important lessons about how our behavior affects our relationships with the people around us. If this has happened to you, my advice to think about how you could have managed the relationship differently and avoided the bad place you ended up in. The third instance for getting fired is perhaps the hardest to wrap our heads around but is critically important. Did you not see what was happening around you? Did you fail to keep up with changes in technology or the industry? In the end of the day, if you don’t keep up, you can only blame yourself and that is very hard to do. In order to really think through what has happened and why you may need to gain some distance from the event itself and lose whatever resentment and anger you have bottled up. Such emotions are legitimate but can get in the way of thinking clearly and can have a negative impact on how you tell your story. If you find yourself in this situation I recommend going on a trip – maybe hiking or biking for a few days, as soon as the situation allows for it, to channel the energy into something physical and allow your mind to sort things out. An important point is to be clear about the degree of financial independence that you have when such things happen. In 1985 I had a couple thousand dollars in the bank and the company gave me about a week’s pay. I was still in my twenties so I sold my Honda Civic to my sister and took out a student loan to go to Business School.

You might, on the other hand, have significant monthly expenses including mortgage payments, other debts, school fees, and many more responsibilities than I did when I was in my 20’s. The first thing I suggest you do if you have just lost your job is to divide your savings by your total monthly expenses. This calculation will give you a number which indicates how many months you can continue at your present rate before getting a new source of income. If the number is somewhere between zero and three, then my advice is to find temporary work as soon as possible. That work may be unrelated to your long term goals but if you can do it remotely, or within whatever limits you currently face it can help pay the bills, then I would consider it seriously. The thing is that the financial stress you are under may cloud your judgment about what to do next. This could lead to you taking the first thing that comes along even if it’s not the right position, the pay is not what you really want or it is located in the wrong part of the world or country. Jumping into the wrong situation may lead to professional problems or cause serious damage to your personal relationships down the line. Another aspect of financial stress is that it is difficult to hide and may put off potential employers. Your desperation might contaminate the interview process and make people uncomfortable. You may also try to rush a process that needs its time and fail to do the proper research into the position, company, or people involved. The key idea if you find yourself in this situation is to buy yourself some time. Doing a consulting project or working part-time, for example, can take the edge off and give you the space and confidence to think deeper about what you want to do and approach the job search in a more orderly and structured way. If, on the other hand, you have either saved enough money or arrived at a reasonable settlement with your former company then you may have six months or even more leeway in which to think about what to do next. In that case, then losing a job can be a tremendous gift even if it does not currently feel like that. In an effort to help people through this situation, I have put some of my thoughts on how to think about jobs and careers on a new website which you can find at turbulenttimes.org. The site is still under construction but if you go onto it today you will see some useful tools and the beginning of what I hope will be a vibrant forum for talking about what kind of work to do in the post virus world.
Share