I find it increasingly difficult to talk to people about important things as it seems everyone has their own set of facts which makes it hard to have serious conversations. This seems to happen more and more frequently when discussing such complex subjects as SARS-CoV-2, climate change, or the nature of the relationship between Big Tech, AI, and privacy and freedom of choice.

A few days ago, for example, an academic for whom I have enormous respect, insisted that there had never been a second wave of any airborne virus including the Spanish Flu and there was no chance that SARS-CoV-2 would come back in the fall. While I hope he is right, History.com does state that there was a second wave in the Fall of 1918, but who knows. I have not, for example, been able to trace the data that was used to draw the chart on the right and it is sensible to question the data quality from 100 years ago in any case. On a different, but related subject, I know many people who insist that vaccines essentially do little or nothing for the public good and have unacceptable levels of side effects, but again, I have not done the research myself.

The thing is that I am not an epidemiologist. I, for example, did my Ph.D. on automotive innovations such as seat belts and airbags and then tried to extrapolate that data to the subject of hybrid and electric cars.Even in those spheres of knowledge where I have spent considerable amounts of time such as environmental sustainability or geopolitics,  there are people who know more than I do and have a deeper understanding of some of the facts.

In the end, when I speak to people who are passionate about a number of specific issues and hold beliefs that are very different from my own, I find it increasingly difficult to reach any kind of common ground.

In trying to make sense of this whole thing my gut reaction is to blame Donald Trump who, according to the Washington Post, has lied or made distorted or misleading statements or tweets an average of 15 times per day since he has been in office. The problem is, first, that my friends and family who support the President would say that the Post is biased against him, and second, Trump is more likely a symbol of the problem than its cause. 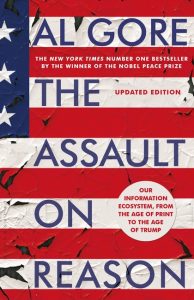 Al Gore is best known for losing to George W. Bush in a highly contested election in 2000 and publicizing the climate crisis with his book and movie “An inconvenient truth”. He is less well known for his 2006 book, An Assault on Reason, which I have mentioned several times in this space over the years and touches at the heart of this problem.

Gore’s book recalls a time when there was a broad consensus in the U.S. Senate and other public forums of what was and was not true even while there were policy disagreements about what to do next. These days it seems that people from all parts of the political and ideological spectrum first disagree with what to do and then look for data to back up their ideas. This is the wrong way around.

One of the programs I enjoy most in my work teaching strategy at IESE Business School is the European Broadcasting Union’s Executive Program we do together with the Anderson School of Business at UCLA. The Program is targeted at Sr. Executives in European public service media companies and over the years we have had over 100 such people from almost every country in Europe. In most European countries these entities are fiercely independent and widely trusted. Part of their challenge is to protect that reputation and develop their business models to do so in the most cost-effective and digital way.

Most of us will never spend the 100’s of hours needed to sift through conflicting viewpoints on complex matters and find The Truth.  Instead, we will turn to a source of news and analysis that we feel we can Trust. It might be the Guardian, The New York Times, or the Wall Street Journal or a number of other credible media outlets. My purpose is not to suggest one or the other but to recommend those outlets which, like many of Europe’s public service media companies, adhere to the highest journalistic standards, check their facts, and only grant expert status to scientists and public policy experts who deserve it.

One thought on “Who do you trust ?”