“At 1-2°C/1.8-3.6°F of global average warming, the world is very likely to experience more intense and frequent climate shocks that could swiftly destabilize areas already vulnerable to insecurity, conflict, and human displacement, as well as those regions whose stability is brittle due to underlying geographic and natural resource vulnerabilities.”

This quote is taken from the latest report of a group that was put together by the Center for Climate Security which is part of the Council on Strategic Risks. The council is a Washington based think tank that is reportedly bi-partisan and has an array of retired Generals, Admirals, and Air Force officers on its advisory council. They set up a working group called The National Security, Military, Intelligence Panel on Climate Change which published the report in February 2020 just as the magnitude of SAR-CoV-2 began to sink in.

You can download the full report here but I did want to give some of the highlights from the executive summary. Essentially, the message is that climate change is directly linked to geo-political instability meaning the more things change, the more unstable the world will be from a political and military viewpoint. Even at low levels of warming, the report cites a number of risks over the next three decades.

Depending on which part of the planet you look at, Climate change will increase famine and water shortages which in turn will drive people off the land and into cities and neighboring countries. Some countries will see their institutions be put under tremendous stress or even collapse and this in turn will create more fragile states on the one hand and the emergence of authoritarian regimes on the other. All of this could lead to regional wars and even tension and conflict between the great powers themselves.

You can see a summary of the findings for the mild, near term scenario below: 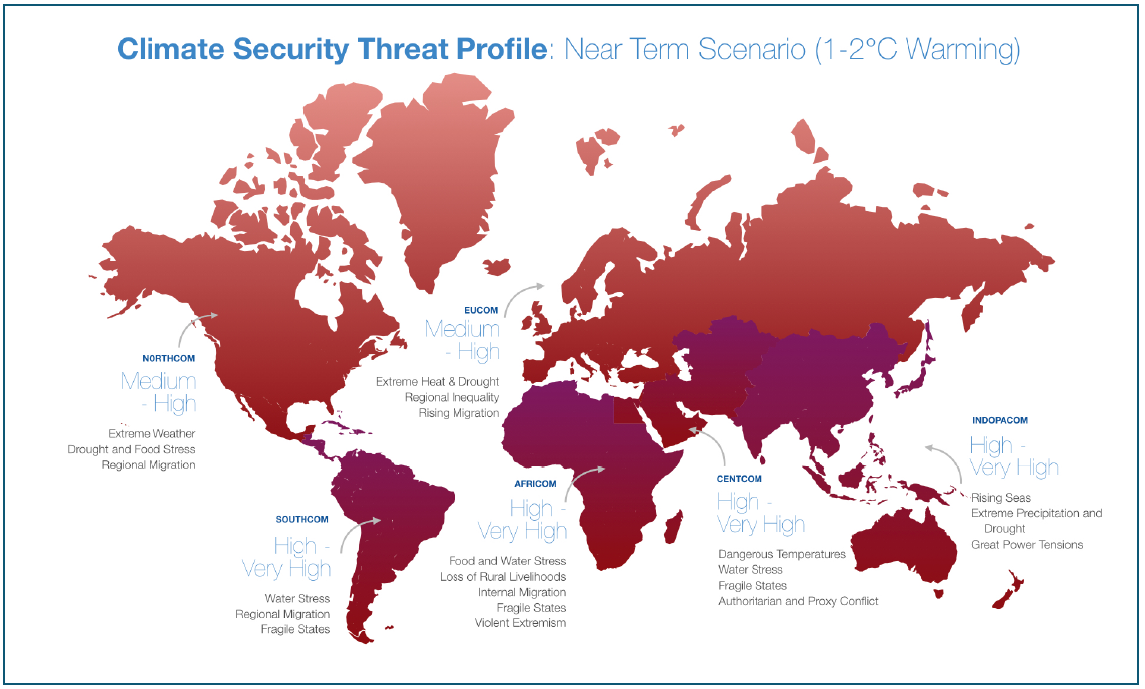 The authors of the report used a five-point scale to measure the risks going from Low to Medium to High, Very High, and Catastrophic. What is striking is that the lowest levels of risk were found to be in Europe and North America but even there it was rated between Medium and High. Above 2.4º C the risk is high, very high, or catastrophic everywhere.

“Higher levels of warming will pose catastrophic, and likely irreversible, global security risks over the course of the 21st century.”

The good news is that the international financial community, many large international businesses, and much of the world’s political leadership recognizes this threat and is committed to taking action. The United nations 17 Sustainable Development Goals are a good example of the kind of actions that will make the world more resilient in the face of climate change the therefore will mitigate some of these security risks.

The bad news is that the Republican Party int the United States has allowed Donald Trump and his friends in the coal business to undermine the efforts of the Obama and Clinton Administrations to make progress on the issue of both Climate Change even if a number of State and local governments are proceeding ahead despite the administration’s wrongheadedness.

The response of Trump and his supporters is to say that groups like the Council on Strategic Risks are part of the “deep state” and somehow against the country’s interests.

In a brilliant opinion piece last week, Illinois Senator Tammy Duckworth defended her patriotism against Tucker Carlson, a journalist who has a show on the Fox network. Senator Duckworth defines herself as Asian American and lost both her legs when the military helicopter she was piloting hit by a rocket-propelled grenade in Iraq. According to Public Citizen, an advocacy group that is no friend to President Trump, Fox consistently puts out news programs which question climate science and denies that the crisis is real. Its analysis of Fox’s coverage in the first half of 2019, singles out Mr. Carlson’s show as airing 41 segments denying climate change or about 7 per month.

The United States spends on the order of $ 700 billion each year on its military forces which involves approximately 1.3 million men and women. These people routinely risk their lives for their country and regardless of one’s political views, it seems that real patriots would recognize the links between geopolitical risk and climate change and try to avoid sending troops into harms way as a result of inaction and misdirection on the climate emergency.