Last week, Vice President Mike pence met Senator Kamala harris in Utah for a debate between the two candidates for the Vice Presidency in the upcoming U.S. Election. The candidates each played to their respective base and both did a good job given what they were trying to do.

Pence portrayed President Donald Trump as misquoted, hard-working, and successful. While I disagree with his assessment and would take issue with the lies and mistruths he made, I have to give him credit for presenting the administration’s record in the best possible light.

In my view, Senator Harris also came across as a credible, sensible, and at the same time passionate defender of the country’s diversity and its basic values. It seemed to me she was using the occasion to present herself to a wider section of the American electorate than has seen her before.

While the format did not allow extensive discussion of any of the different topics that the moderator, Susan Page, brought up, one area which underlies the differences between the Republicans and the Democrats in this election is the issue of the environment and climate change. Mike Pence said he was “proud of (his administrations) record on the environment and conservation” and pointed to the Great American Outdoors Act as proof of Trump’s commitment.

The act, which was introduced by Colorado’s Junior Senator, Republican Cory Gardner and will provide needed funding for the United States system of national parks. It received widespread support from both parties and particularly in the Western part of the country where many of the parks are located. Kamala Harris was actually one of 59 co-sponsors of the law which President Trump signed on August 6th.

According to Linda Bilmes, a Sr. Lecturer at Harvard’s Kennedy School who is an expert on funding the national parks, the bill is the “biggest land conservation legislation in a generation”.  She also said “It is ironic that President Donald Trump will get to have his signature on a historic milestone that has eluded conservationists for decades. The Trump administration has undermined public land protection more than any in my lifetime. It slashed Bear Ears National Monument in Utah by 85 percent, reduced Grand Staircase Escalante by 50 percent, removed protection for millions of acres of sage-grouse habitat in Western states, opened the Arctic National Wildlife Refuge and most of the U.S. coastline to oil and gas drilling, reduced protections for wetlands, and weakened the Endangered Species Act. Earlier this year, Trump proposed cutting discretionary spending on the Land and Water Conservation Fund by 97 percent.

Pence said several times that the Trump administration would “continue to listen to science” even while he also called into question the connection between greenhouse gasses and climate change. This, of course, is the same administration that put Scott Pruit in charge of the Environmental Protection Agency and has systematically tried to remove the protections that have given the United States the clean air and water that Pence boasted about.

For her part, Senator Harris agreed that climate change is an existential threat, referred to wildfires and extreme storms, and committed a Biden administration to re-joining the Paris agreement.

Both candidates made reference to the Green New Deal and the Biden/Harris version which you can see on their website here. Pence attacked the plan and Senator Harris for supporting it and being a co-sponsor to the original Green New Deal back in March 2019. As far as I can see, the Biden/Harris version includes the most critical environmental aspects of the overall idea but does not include some of the more progressive (or leftist) aspects of the original proposal.

The key difference in my view is that Trump and Pence see natural gas and hydraulic fracking as the answer to the climate issue since gas does have lower emissions than coal and heavy fuel oil. (On fracking, both candidates said they were in favor of the technology but neither one talked about the most important thing which is to provide adequate oversight on the industry to ensure that fracking is done with proper casing, protection against methane leakage, and water treatment.)

Biden and Harris, on the other hand, have a goal of getting the U.S. back to the forefront of environmental technology and achieving a zero-emissions power base by 2035. In this view, which I share, natural gas is the bridge to a clean and renewable energy future.

Since the first Trump/Biden debate was so dysfunctional, and there may not be another one, I suggest watching the full 90 minutes of the Pence/Harris debate if you have not done so already. 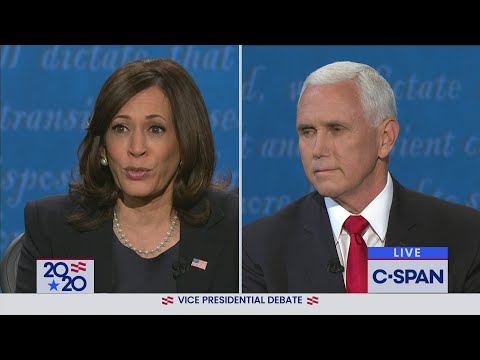 In my view, the contrast is clear on a large number of issues including that of the environment and climate change.