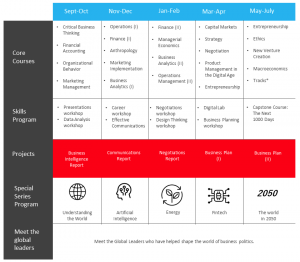 This fall IESE held the second edition of its Master in Management program which is a one-year course targeted at young men and women who have recently finished an undergraduate degree in line with the Bologna declaration of 1999. I had the pleasure of teaching a course titled Understanding the World which is part of a series of special subjects that complete their primary training in business fundamentals. The students tend to be 22 or 23 years old, come from 18 different countries and all but four or five studied business, engineering, or law as undergraduates. They are all super smart.

The course is relatively short but I try to give the students a sense of the historical forces which have led the world to its present state, discuss some of the key geopolitical issues facing the world and show them how a wide variety of the world’s challenges are connected to each other. All of this was done with the backdrop of SARS-CoV-2, the economic impact that the virus and the measures put in place to control it have had, and of course, the American election.

As part of their coursework, each student was required to record a 2-3 minute video blog explaining whether they were optimistic or pessimistic about the future of the world. This weekend I divided my time between reading the latest polls from Florida, Texas, and Pennsylvania and watching the student’s video blogs since my grades are due next week!

In the first place, about 25% of the students described themselves as pessimistic. These students cited problems such as the ongoing pandemic, tensions between the U.S. and China, other global hot spots, fake news, privacy and big tech, and the looming climate crisis as reasons for their pessimism. A few spoke about people being essentially selfish and that human nature itself was holding us back. What truly moved me, however,  was that almost 75% of the students, like the woman below said they were optimistic about the future of the world.  (One out of 80 would not say if he was optimistic or pessimistic).

These students discussed the same problems as their pessimistic classmates but framed them as challenges rather than problems. While different students cited different reasons for their optimism, the following are some of the ideas that they most commonly expressed.

In the first place, many students cited the historic increase in wealth that the world has experienced over the last fifty years and how that wealth has resulted in less poverty, lower infant mortality, longer lives, and more materials wealth for most people on the planet. The impact of the pandemic was not overlooked but instead placed in the context of years and years of progress.

Secondly, many students thought that technology, in its broadest sense, had the potential to overcome some of the most pressing problems facing humanity. These students typically recognized the dangers of information systems technology in terms of privacy and jobs but thought that in the end, digitalization would combine with other technologies to cure disease and find a way to power a low carbon economy bringing prosperity to all.

In terms of geopolitical tensions, the students spoke about political leaders having had learned the lessons of the last century and some cited statistics showing how war itself was going out of fashion in historical terms. on the specific issue of the U.S. and China’s stormy relationship, the optimists felt that a hot war was not really possible and even a cold war would have limits due to the interdependence of the world’s two largest economies.

A fourth point that many students insisted upon was that people had a natural tendency to innovate, adapt, and overcome the challenges that are put in their way. This line of thinking was partially inspired by Lenni Montiel, an executive of the United Nations Development Program who I invited as a guest speaker and was able to zoom in from New York. Speaking about the current Pandemic, Montiel thought that although the world had lost as much as 10 years of its progress on development, humanity had made it through worse crises in its history and would survive this one.

A fifth point was that several students felt that their generation had the preparation, awareness, and attitude required to really make a difference.

A final point that I thought was truly inspiring was that many students acknowledged the challenges facing the world but then went on to say that they chose to be optimistic in any case because they felt that only a positive attitude would bring about positive change. These students cited movements calling for more political rights and environmental protection as signs that we are on the right track. One said, “We have to remain optimistic!”.

As long as our young people believe in the future as strongly as my students do, I believe it will be bright.

One thought on ““We Have to Remain Optimistic!””