In reviewing different policy approaches that an incoming Biden-Harris administration can consider to accelerate the transition to a low carbon economy, I came across a fascinating article that discusses using existing U.S. law to force financial institutions to lower their exposure to the fossil fuel industry.

The report, A Regulatory Green Light, was written last January by Graham Steele who is the Director of the Corporations and Society Initiative at Stanford Graduate School of Business.

The essence of Steele’s argument is that not only does climate change itself pose a systemic financial risk but that the inevitable transition to a low carbon economy will lead to a collapse in fossil fuel assets and the value of the companies that hold them. He points to different studies that show the exposure of large banks, insurance companies, and asset management firms such as Black Rock holding enormous amounts of loans, bonds, and stock in firms that will lose their value as the world moves away from coal and oil. 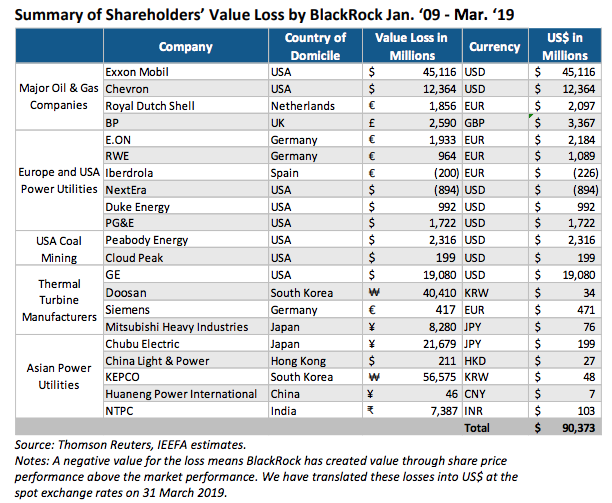 One of the studies he cites, for example, was made by the Insititute for Energy Economics and Financial Analysis, which promotes renewable energy investments. It says that Block Rock has lost $ 90 billion of its investors capital due to such investments and that its actual holdings do not much the green rhetoric for which its CEO Larry Fink is well known.

Drawing on the financial crisis of 2008/9, Steele argues that the popping of the carbon bubble, as he calls it can spread similar havoc in the financial system since many of the players hold the same fossil fuel assets (Asset liquidation channel) and have holdings and investments in each other (Counterparty transmission channel).

Steele’s proposal is to use the Dodd-Frank Wall Street Reform and Consumer Protection Act passed in 2010 to oblige financial institutions to mitigate the risks of holding these assets and even to decrease their exposure. The key to being able to use Dodd-Frank for this purpose would be for the Financial Stability Oversight Council (FSOC) to determine that climate change and the transition represent a systemic risk and therefore should be regulated.

In his paper, Steele goes through a number of potential arguments against this course of action. One of them is that some might say that the financial industry can manage its own climate risk. On this topic, Steele cites a number of sources that confirm that “financial institutions do not effectively self-regulate, particularly as it relates to catastrophic risks”.

This idea echoes the work of Columbia University’s, Graciela Chichilnisky, who argues that business leaders, in general, do not measure catastrophic risks very well. In her work, she argues that climate change requires a different lens to understand its economic impact.

From a financial point of view, the problem is that the net present value of any negative financial result will be zero if it is far enough in the future or a relatively low probability is placed on it.

In the conclusion to his paper, Steele argues that “macroprudential regulation mitigates the moral hazard problem posed by the industries and financiers driving climate change.116 Under the status quo, the worst polluters are being treated as if they are “too big to fail.””

Whether a Biden-Harris administration makes progress on this issue will depend on who is asked to serve as the U.S. Treasury Secretary and if they are confirmed by the Senate. One candidate who would certainly take such steps but is unlikely to be picked is Senator Elizabeth Warren. The problem is that if Senator Warren would join the cabinet, The Republican Governor of Massachusetts would most likely appoint another republican to fill her seat until her term expires in 2025.

Part of the reason there is so much attention (and money) going into the two Senate runoffs in Georgia is that all cabinet appointees must be approved by the Senate. If Republicans win one of these seats, that will give the party control of the Senate and an effective veto on President-Elect Biden’s cabinet and restrict his administration’s ability to take the kind of steps argued for by Graham Steele.