Like many people, I was initially disappointed by the news that Joe Biden and his Secretary of State, Anthony Blinken, will not take any measures directly against the Saudi Crown Prince for his involvement in the killing of Jamal Khashoggi in October 2018. 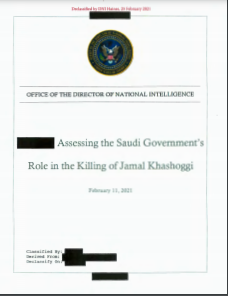 If you managed to miss it, the Biden administration just released the executive summary of the findings of American intelligence that made the assessment that “Muhammad bin Salman approved an operation in Istanbul, Turkey to capture or kill Saudi journalist Jamal Khashoggi”. The report has been de-classified and can be found here. It is unambiguous.

At the time of the killing, Blinken’s predecessor, Mike Pompeo published an article in the Wall Street Journal which did not condone the killing but essentially gave the Prince, known as MBS, a free pass due to the strategic nature of the relationship between the United States and the Kingdom. Pompeo’s boss, Donald Trump, publically said he was not sure of MBS’ role in the killing even though he and his advisors had certainly seen the report that was just released.

At the time I wrote that the U.S. had reached a new low in its foreign policy and many people have criticized Biden and his team for not doing more. What they have done is to extend sanctions that Pompeo did put on the team that killed Khashoggi to dozens of other Saudi officials as well as create a new policy named after the Saudi dissident journalist to protect such people in the future.

Blinken made reference to these measures in a press conference last Friday and you can read it yourself here. You need to skip past his statements about Canada and Mexico and get to his answers to a question asked by NBC’s Andrea Mitchell.

Amongst other things, Blinken makes clear that the United States will use its influence to end the war in Yemen and will only sell defensive weapons to Saudi Arabia. It will not cut off relations with the Kingdom as doing that will only strengthen Iran’s position in the region and could lead to war.

What I am struggling with is that while the tone of Blinken’s message is very different than that of Pompeo, the essence is the same at least on the surface.

As Crown Prince, MBS is next in line for the Saudi throne and has taken a number of steps to modernize the country. According to Ben Hubbard who wrote a profile of MBS for  The New York Times last year “He is determined to give Saudis a shining, prosperous future, and exercises an unflinching willingness to crush his foes.”

Being so far removed from the situation, it is difficult to know what to think about the Crown Prince. His moves to open up Saudi society, achieve his vision of Saudi 2030, and build a new city on the Red Sea are all positive.

Nicholas Kristof, the journalist, was a friend of Kashoggi and point out in a column on this topic that only one of the last six Crown Princes have become King in Saudi Arabia. His view is that the Saudi’s would be better off with a different successor to the throne.

Perhaps the Biden administration is working quietly behind the scenes to have more of an impact on the Prince’s future behavior and to make sure the United States’ support of the Kingdom corresponds both to its interests as well as its values.