In a few weeks, the world will turn its attention to Glasgow and the 26th conference of the parties (COP) to the 1992 UN Convention on Climate Change. The event is known as COP 26.

These meetings have occurred almost every year since beginning the process in Rio almost 30 years ago. The process has had its fits and starts and some would say that it reached its culmination in the 2015 meeting in Paris which produced a global agreement to limit the average rise in temperature to 2º Celsius and to try and keep it below 1.5º. We have already heated up the planet by 1ºC and urgent action is needed to avoid the worst-case scenario.

Even before the Rio conference, in 1988, The World Meteorological Association and the United Nations established the Intergovernmental Panel on Climate Change (IPCC). This is a scientific endeavour working under the United Nations to estimate the extent of the problem and to propose solutions to it. So far it has published six complete assessments of the situation. The first was in 1990 and the 6th was published just a few weeks ago.

Everyone should read the Summary for Policymakers of the latest report which you can find here. The fundamental difference between this report (AR6) and earlier reports is that the IPCC has dropped its normally cautious and careful language. Typically it would give bad news and qualify it by saying things like they had high confidence in certain findings, etc. This time, the language is clear and alarming. The first finding in the summary, for example, is:

I could go on, but my interest today is not to overstate the obvious or summarize the IPCC’s report. Instead, I want to talk about an initiative that IESE business school is involved in which so far combines professors from 8 of Europe’s leading business schools which we are calling Business Schools for Climate Leadership.

The group is the idea of the former Dean of the Saïd Business School at Oxford, Peter Tufano,  for us to work together on this critical topic. Besides IESE and Saïd, the group includes IMD, Insead, HEC Paris, The London Business School, The University of Cambridge Judge Business School, and The Instituto de Empresa in Madrid.

The long-term vision of this community is to explore opportunities to influence the leaders of organizations, by :

The first activities that the group is doing are preparing a digital toolkit that summarizes some of the issues we think business leaders need to think about and also presenting a series of webinars to talk about the different ideas. I will, for example, participate in a webinar together with a colleague from Insead, Mark Stabile on October 13th at 18:30 Barcelona time. You can learn more about it here. 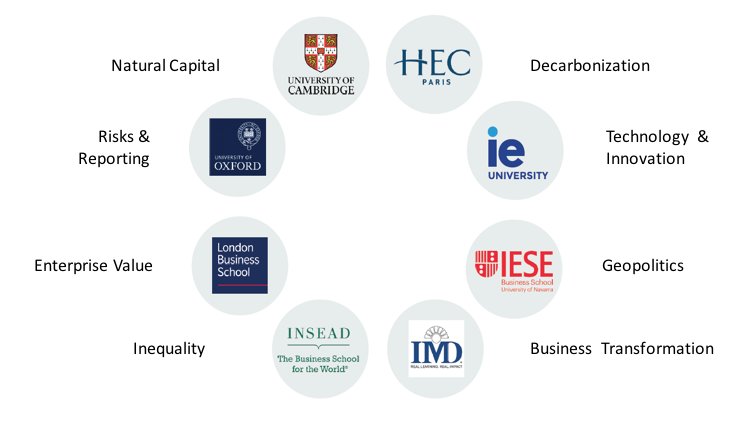 We are also hoping to share the toolkit with the world at COP 26 itself.

I have written in the past about the Paris climate deal and some of the challenges associated with it. The biggest issue is that the Nationally Determined Contributions, that is to say, the voluntary targets that each country has committed to) were not enough to solve the problem in 2015. Most observers expect that many countries will substantially increase their targets in Glasgow.

In addition to national governments, hundreds of companies, cities, and regions are also making commitments to reach zero emissions. This is often referred to as the Race to Zero and is an example of how all aspects of civil society need to come together. This is the idea behind Business Schools for Climate Leadership.