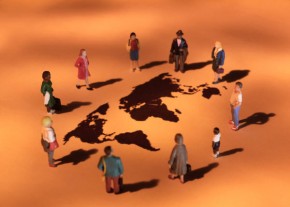 Today’s globally dispersed business landscape and technological progress have created a nurturing environment for global virtual teams. On one hand, globally dispersed businesses are in dire need of such forms of work, to save on travel and expatriation costs while still keeping international teams connected and working on common projects. On the other hand, modern technologies allow for satisfying this need, making global virtual cooperation practical and accessible. As such, global virtual teams are a common phenomenon in many multinationals.

Yet, there also seems to be a consensus on seeing several challenges associated with this ‘virtuality’. One major challenge refers to virtual communication. One of my previous blog posts on the topic of virtual teams highlights that the challenges may arise exactly due to a lack of face-to-face time in such teams. When we communicate with people face-to-face, our communication also includes a multitude of nonverbal cues (e.g. tone of voice, facial expression), which get lost in virtual communication. Moreover, apart from lacking important elements of communication, the virtual environment poses its own challenges. Indeed, have you ever fully succeeded in keeping a high-quality contact with your foreign colleagues, friends or acquaintances simply via e-mail or social media? Doesn’t it happen to you that e-mails get answered later than expected, instant social media messages get misunderstood, and time differences limit opportunities for video conversation?

Naturally, these known drawbacks of virtual communication can be dealt with by putting some extra effort into the process. For instance, a recent HBR blog post by Paul Berry, a Founder and CEO of RebelMouse, shares several communication tips to be used specifically with global virtual teams (See also these more general tips for managing virtual teams). At the same time, there is still a view, voiced for example in a Forbes article, that the disadvantages of virtual teams threaten to outweigh the benefits and are quite difficult to beat.

Interestingly, recent academic research on the relevant topic suggests that the disadvantages of virtual teams can actually turn out to be advantages. Specifically, having studied global virtual teams, researchers Magnusson, Schuster and Taras (2014) found that psychic distance, which is a perceived assessment of whether one location feels nearer than another, has a positive effect on team performance. Contrary to the dominant view of psychic distance as a barrier, the researchers identified that working virtually with each other, hence experiencing physic distance, truly does make people expect substantial collaboration challenges, but that these challenges increase employees’ efforts towards positive collaboration. As a result, greater efforts increase performance, showing how a disadvantage turns into an advantage.

This study reminded me of the story of David and Goliath, which was analyzed in great detail in Malcolm Gladwell’s fascinating book (2013). Contrary to the popular view of the story where David, seemingly disadvantaged, miraculously beats the giant, Gladwell proposes another point of view. What if the small size and military inexperience of David (he was a shepherd), that were considered disadvantageous, actually turned out to be opportunities? What if the giant size and heavy armor of Goliath actually let him down in the infamous fight? Due to his size and lack of armor David was faster, and due to his shepherd experience he attacked Goliath in an unexpected way. As such, the story is about finding a way to make challenges work for your own benefit.

In a similar vein, the study results (2014) suggest that the challenges or disadvantages of virtual reality are not negative per se. On the contrary, being aware and ready for the potential challenges may motivate employees in global virtual teams to put more effort into collaboration, which, in turn, is good for overall team performance.

Gladwell, M. (2013). David and Goliath: Underdogs, misfits, and the art of battling giants.

One thought on “Global Virtual Teams – a Challenge or an Opportunity?”