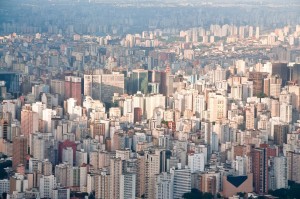 Sao Paolo is big. For anyone who does not know the city it is a remarkable human achievement with rows and rows of towers stretching as far as the eye can see in every direction. I am here teaching on a program at IESE’s sister school in the city, ISE which offers an executive MBA and a number of executive education courses for individuals and companies.

With a population of 20,800,000 people, Sao Paolo ranks as the 7th most populous city in the world and the largest in South America! When I was born, only Tokyo, New York, and Shanghai had populations greater than 10 million people and now there are 22 cities in the world at that scale.

Writing in her blog  last week, my colleague Africa Ariño, made reference to outstanding research done by our colleagues Juan Enric Ricart and Pascual Berrone on comparing cities around the world using their Cities in Motion Index. The idea, if I understood it correctly, is to go beyond simple models and to try and capture to what extent cities are well governed, dynamic places that provide a clean environment for their citizens using the latest technology and innovation. According to their 2014 ranking of 135 cities, Tokyo, New York, and London are at the top.

Sao Paolo comes out first among the 10 Brazilian cities considered but is still number 93 in the world. Curitiba is close to Sao Paolo, Rio is number 116 and Brazil has 7 cities ranked in the bottom 10. The ranking reflects the deep divisions in Brazilian society  and the city’s metrics were particularly bad on social cohesion and the development of human capital.

One can see these divisions walking around the city. The ISE Business School is located near Alameda Paulista and the area is full of tall, luxury apartment buildings with heavy security as well as well appointed hospitals, shopping malls, office blocks, etc. One can also see tens of thousands of working people at all levels of society on the street as well as an occasional beggar holding a baby.

Last week the Rocky Mountain Institute’s Hutch Hutchinson took some time to talk to my second year MBA class on sustainability and made the point that cities are, in fact, much more efficient than the countryside in terms of energy consumption and CO2 emissions . In a study on San Francisco, The Global Footprint Network, found that on the one hand cities are very efficient due to the use of mass transit and having people live closer to one another but on the other, the prosperity of city dwellers (at least in San Fransisco) increases the footprint more than the gains in efficiency.

Writing in the Huffington Post, my former colleague Manel Baucells and his co-author Rakesh Sarin talk about happiness being the gradual balance of expectations with reality. While it is easy to be critical of a sprawling megalopolis like Sao Paolo and measure the income inequality across the city, perhaps a more interesting question would be to try and determine if the Paulistas or Paulistanos are happy.

As I walk around the city people of all kinds smile and constantly ask if everything is good. (Todo Bem?)

Despite the traffic, the latest corruption scandal, and the rain this week, the people look happy to me . Perhaps its an aspect of the Brazilian spirit or perhaps I’m just walking around in the nicest neighbourhoods.

3 thoughts on “Happiness in Mega Cities ?”