I have been traveling in the United States for the last few weeks and while many people are enjoying the hot summer weather, the political climate has been even hotter especially in the run up to the presidential primary process on the Republican side.

Perhaps the most divisive issue is immigration policy and Donald Trump’s proposal to deport approximately 11 million undocumented immigrants and change the U.S. constitution to end the policy of granting  American citizenship to children born in the U.S. regardless of their parents legal status. As reported by the The Guardian, such a a mass deportation appears to be logistically impossible and would certainly involve spending huge amounts of money and moral capital.

Another question is what would then happen to the millions of children who are U.S. citizens if their parents are forcibly deported. The whole thing appears destined to turn into one of the darkest chapters in American history if allowed to happen.

Trump, who leads in the polls,  also wants to build a wall along the 3,145  Kilometre (1,954 miles) between the United states and Mexico and somehow oblige Mexico to pay for it. Such a move and possibly limiting remittances sent from Mexican immigrants back home would break the cordial nature of Mexican-American relations that have developed over the last generations and destabilize Mexico itself.

Fortunately, not everyone in the Republican party is as extreme as Donald Trump and Jeb Busch has finally stood up to Trump and denounced his ideas as “catastrophic”. Governor Busch’s wife, Columba, is from Mexico and their children are bilingual. Marco Rubio is the son of Cuban immigrants and told NBC News that the plan could not work and would never pass congress.

The Annenberg Public Policy Center of the University of Pennsylvania has a project called FactCheck.Org which look into statements made by politicians and can find little basis in fact in Trump’s framing of the immigration problem.

As discussed in a post a few weeks ago, a different framing has to do with the positive economic impact that waves of immigration has had on the United States and the strength that it gives the country. In Day of Empire, Yale University’s Amy Chua maintains that all of the great civilizations had the ability to bring people together from all parts of the world and harness the diversity of their skills and ways of thinking. 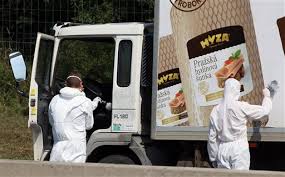 With the horrific discovery of 71 bodies of immigrants in a truck in Austria and the continuing tragedies in the Mediterranean and the Indian ocean, mass immigration and what should be done about it could, together with climate change, become one of the defining issues facing the Western democracies in the years ahead.

Immigrants undergo tremendous hardship, systematic abuse and rape on their journeys and are starting to push back in  specific places such as Melilla and Calais. Will supposedly civilized countries continue to build walls and limit immigration and continue to provide opportunities for the ruthless and inhumane mobsters who profit from the situation?

Perhaps now is the time when more enlightened politicians can offer hope to the world’s desperate and poor. That hope has to combine improving the lives of people in their own countries as well as offering paths to citizenship and much broader and larger legal immigration pathways.

Whatever we do, history will remember this as the time that the West rose up to the challenge or failed to act.