The effects of Brexit are already becoming visible in the U.K. as companies rethink their medium term plans in the country and individual europeans begin to leave. The English appear to be facing the situation with grim determination to carry through what they started despite the realization that much of what the UKIP and the Leave campaign said about the process was wrong, distorted or both.

In earlier posts I have focused on how companies might think about dealing with the uncertainty that surrounds the decision of the United Kingdom to leave the European Union. At issue is that the negotiations on what kind of an arrangement will be made are just getting underway and many critical issues need to be hammered out well before March, 2019, when Brexit is supposed to happen.

My advice for companies is to develop scenarios for what is called a “hard” or “soft” Brexit and maybe even another one for the possibility that the a new referendum will be called on the final proposal and defeated. This would logically lead to companies taking action now that will provide strategic flexibility no matter what the politicians eventually come up with.

An example of such behavior is, in my view, the announcement by Citi that it is moving 250 positions from London to Frankfurt and making that city the “hub” for its EU operations. So far, Citi is keeping its London operation largely intact but the immediate move of a number of functions to Germany could be a first step in thinking the central role that London plays in the bank’s international business.

The thing is that scenario planning might be o.k. for companies but may to really work for normal individuals as they face the question of what to do with their lives. According to the Guardian, legal EU immigrants to the U.K. are increasingly being singled out as if a hard Brexit had already occurred and there is a deep sense in the country that such people are no longer wanted.

While a casual visitor to the U.K. will encounter many such people working in the country’s hotels and restaurants, a deeper look will find immigrants deeply embedded in all aspects of life including the railways, social services, and hospitals. A particularly worrying issue is that the National Health Service currently has a shortage of 24,000 nurses across the country according to the Independent and the same source cite government statistics showing that 16,000 foreign nurses have left the country in 2016.

Life and Career Planning in a Turbulent World

Although I just published a book on how business strategy can be developed in a turbulent world and make the case for scenario planning, at the personal level people need to make decisions about what to do and where to live. My own great grandfather came to the United States from a province of Austria that later became part of Poland and our family has prospered there for over 100 years even if I happen to live in Barcelona. 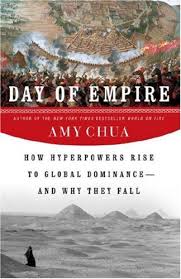 As men and women from all over Europe and the world think about staying the in the U.K., what they see is uncertainty at best and perhaps seriously bad times ahead. Many of them look at slowly improving economic conditions back home and decide that it is a good time to go home where people speak their language and where they will always be welcome.

In Day of Empire, Yale’s Amy Shua makes the case that the truly great powers of the world became great because they were able to harness the talent and energy from people all over the world. By offering tolerance, prosperity and a chance to do amazing things, great nations became a magnet for the most talented and creative people and were thus able to leverage their skills.

Maybe Theresa May and Donald Trump should read the book.