For the last few months, I have been travelling across Europe and speaking to members of the IESE Alumni Association and their guests about the link between a company’s regional and global strategy and some of the geopolitical issues facing the world.

The tour actually started even before my book on the topic came out last summer and I have spoken to groups in New York, Amsterdam, Paris, Moscow, Munich, London, Lisbon, Berlin, Düsseldorf and wind it up in Brussels today.

The basic idea I am trying to get across is that the worlds of international politics and international business need to get closer together. In my view, Sr. Executives and Board Members of international firms have a fiduciary responsibility to be well briefed on the issues which affect their companies and should be taking steps to mitigate risks and proactively manage their exposure.

Last week in Berlin, a former student asked if business could actually have a a negative impact on a delicate situation if a large number of companies were to actually take my advice. His point was that by managing the risks associated with an event and for example moving to a lower risk location, business leaders might precipitate unwanted outcomes.

The setting for the Berlin event was the Spanish embassy which is an impressive building built during the second world war by the German government to replace the former embassy which they had expropriated just before the war began as part of the re-urbanization of Germany’s capital undertaken by Albert Speer.

Today the building is a fascinating blend of 17th century tapestries and modern art and also is an example of how far the world has come since its construction in terms of promoting ideas of democracy, diversity, peace and international cooperation and coordination.

Berlin itself is an example of how far the world has come. Only 55 years ago, John Kennedy made his famous Ich bin ein Berliner speech. Today, what Winston Churchill called the “Iron Curtain” is largely gone from Central and Eastern Europe and we are able to watch the World Cup unfold across the width and breadth of the Russian Federation.

In a sequel to his outstanding introduction to Geopolitics, Prisoners of Geography, journalist Tim Marshall, has recently published Divided: Why we are living in an age of walls which attempts to capture a trend he sees towards more rather than fewer walls going up around the world. In my view the picture he paints is overly dark as it fails to capture the sweep of history that is largely going towards more, rather than less openness around the world and is well documented by writers such as Hans Rosling and Stephen Pinker.

Nevertheless the more nuanced point that Marshall makes in the conclusion to Divided is that humans are largely tribal in nature and that only by recognizing the issues that divide us will we have any hope of resolving them and continuing to make progress of the kind you can see just walking the streets of Berlin. 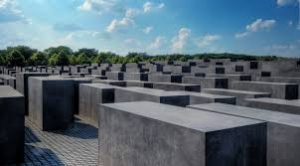 For me the most moving part of visiting Berlin was to walk among the 2,711 concrete  blocks which make up the field of Stelae, a memorial to the holocaust in the center of the city, just along the route of the old wall.

Coming back to my student’s question, I believe that business has a unique opportunity to make a positive contribution to global trade, peace, and prosperity and the success of projects like the European Union. Business can build international networks, train and promote local people, and be exemplary in their openess and tolerance. They can also express their opinion on critical issues and reward those governments that move the world forward and disinvest or de-prioritize investments in countries whose governments want to go the other way.

Doing this requires a deep understanding of the issues at play and complex decisions about what to do and not to do where and when. Will disinvestment hurt local people more than the government in power? Will engagement with a specific regime help the people in a country over the short term and perhaps lead to a more tolerant and representative government in the medium term?

While I know these questions are difficult, my conviction is that business has a responsibility to itself and civil society to address these issues and that the Board of Directors, or whatever body provides its governance, is the right place to do it.