At Schneider Electric’s Global Innovation Summit a few weeks ago, Schneider’s visionary Chairman and CEO, Jean-Pascal Tricoire, made an inspiring speech in which he spoke about two disruptions that his company was involved with meaning the digital transformation of society and the transition to a low carbon energy mix. While I am a big fan of Schneider Electric and Mr. Tricoire, I do think the word is disruption is a bit overused these days. 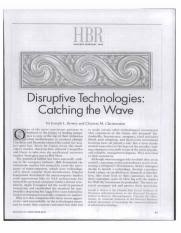 The term was coined by Harvard’s Joseph Bower and Clay Christensen in an article published in the Harvard Business Review in 1995 and the basic ideas were then used in Christensen’s different books including The Innovators Dilemma. While my interest is not to go through the whole theory here, I do want to highlight what was meant by disruption. The article and the books talk about how new technology is sometimes ignored by large, succesful companies and is then developed in niche applications. In some cases the new technology is eventually adopted by the mass market and in some of those cases, the large firms who dominated the field before are not able to make the technological shift and fall by the wayside.

To use Christensen’s terms the incumbents are disrupted and a new set of companies emerge which dominate the business. The issue with such innovation is that it is very difficult-or even impossible- to say if a technology will be disruptive or not as it emerges. If the incumbents successfully make the transition, then it will not be. If new players replace them in the mainstream business then it will have been so.

An example which is particular close to my heart is the shift which is currently underway in the automotive industry towards hybrid and electric cars. As I have written in other posts, there is evidence that electric vehicles may be reaching the tipping point. What I do not see yet is clear evidence that they will be disruptive in the sense that Professor Christensen used the word.

According to the Global EV Outlook 2019, published by the International Energy Agency (IEA), just under 2 million electric vehicles were sold around the world in 2018 including battery electric and plug in hybrids. Over one million of them were sold in China which is just under 5% of the market. Speaking of market share, due to its aggressive tax policies in favor of EV’s, 46% of new cars in Norway were electric last year and that might be the shape of things to come. In the report, the IEA explores two favorable scenarios for EV’s to 2030 with a global share of either 15 or 30%.

Assuming that the report is directionally correct, the question about disruption is who will be making these cars?

One part of the story is that virtually all of the major automotive companies have announced initiatives to launch a number of fully electric models in the next few years. Examples which are cited in IEA report include Ford (40 models by 2022, VW (80 models by 2025) and of course Toyota which is not only offering hybrid models of most of its cars but will launch 10 fully electric cars and already has a fuel cell electric vehicle on the market.

In a move which I have long thought made sense, luxury carmakers such as Rolls Royce and Mercedes Benz are also developing all electric models.

Another part of the story is, however, that today EV’s make up a tiny slice of the business for most of these companies and their attention is still firmly rooted on the internal combustion engine. Nissan is a good example and while the Leaf is the third highest selling electric vehicle in 2018, they made up only 1.5% of Nissan’s total of just over 5.5. million cars. Nissan sold almost 42,000 leafs in Europe but that is still only 6 % and the company does not sell the Leaf in China although there is an EV version of its high volume Sylphy sedan. 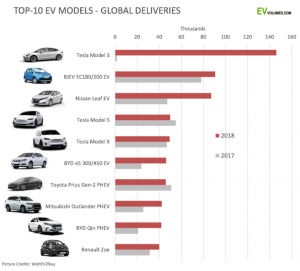 I had dinner this weekend with a friend who has finally received his Tesla Model 3. He was one of the hundreds of thousands of people who paid Tesla $ 1,000 to reserve the new car before it was launched and had to wait many months to receive it. The net result is that he could not stop talking about the car and how much he loved it. He was exited about the automatic driving, the range and being able to charge it at night. He and his family are planning a trip to his native Sweden in the Tesla and are quite comfortable with using the super charge network which he says can give him 80% of the cars range in about 20 minutes. His view is that you want to stop anyway every 300 KM or so and is planning to make the trip in three days.

At this moment, the leaders in the EV race appear to be Tesla, BJEV and BYD. BJEV is 60% owned by BAIC, A Chinese automaker which has joint ventures with Mercedes Benz and Hyundai  but is essentially an electric vehicle start up. Another Chinese company, BYD, is a diversified manufacturer of electric powered equipment and batteries. Its EV play is the only bet it has in automotive.

Tesla is also in the battery and solar power business but like its Chinese rivals is focused on electric  vehicles when it comes to cars.

Looking ahead, one important question is if the scenarios put forward by the IEA are realistic? In my view EV’s will one day represent 30% of the vehicle market and then go beyond that. What I do not know know is if that will be in 2030 or 2050.

The second question is if those cars will be Fords, Nissans and VW or will they be made by Tesla, BJEV and BYD? This is what disruption is all about.

One thought on “Electric Disruption ?”