A number of weeks ago I wrote a post about the state of play in mining with respect to environmental sustainability and this post will discuss the banking sector.

According to the The Corporate Sustainability Assessment (CSA) and the Dow Jones Sustainable Indexes, the leading bank in this regard is Spain’s Banco Santander, led by Ana Patricia Botín who is a member of the World Council for Sustainable Development (WBCSD).

Although Ms. Botín’s father, who proceeded her as Chairman of the bank, was committed to social programs such as its support for universities around the world, it has been Ana Patricia who has doubled down on Santander’s commitment to sustainability.  Today, the bank’s “responsible banking” strategy has six parts:

The Equator Principles (EPs) are a set of 22 categories of risk management that banks ought to look at when lending money for advisory, project finance, corporate loans and bridge loans. 98 financial institutions in 37 countries have adopted the Equator Principles which look at everything from baseline environmental conditions to fire prevention and life safety. 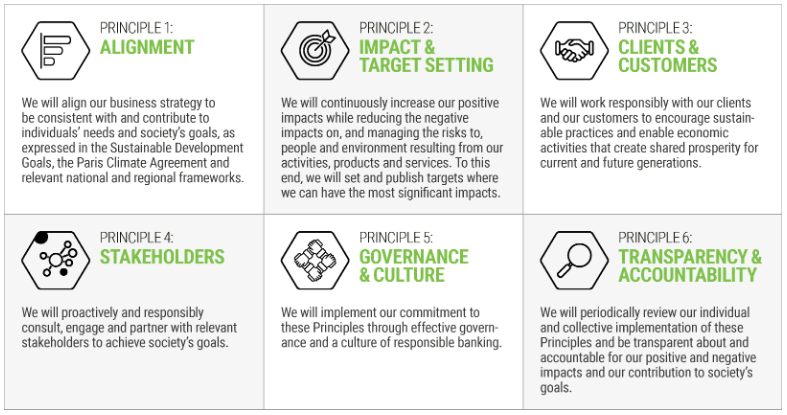 Santander is also one of the founding members of the UN Environmental Program Finance Initiative which is essentially about linking the business of banking with the United Nation’s 17 sustainable development goals and making sure that the banks which join the initiative have the processes, governance, and transparency in place to make sure it actually happens.

Banco Santander is the largest bank in Spain and according to FXSSI, a website, is the world’s 16th largest bank. For it to be very public about its commitment to sustainability and to apparently make the deep changes required to come out as a sector leader in the Dow Jones Index, is an example of how sustainability is going mainstream in the corporate world.

Another example is called the The U.S. Alliance for Sustainable Finance (USASF), based in New York City and led by former Mayor Michael Bloomberg.  The idea behind the USASF is to make it easier for financial institutions to lend money for clean energy projects snd also for infrastructure designed to increase resilience in the face of climate change. Founding members include Citi, Chase, Goldman Sachs and J.P.Morgan.

All of this activity in the banking sector makes me think we are at or approaching a tipping point in sustainability. In 1972, the Associate Director of the FBI, Mark Felt, said to the young Bob Woodward and Carl Bernstein that they should “follow the money” during their investigation of the Watergates scandal.

If “the money” is becoming sustainable, then industry will quickly fall into line.