Over the Thanksgiving Holiday, the impeachment of Donald Trump has heated up. The Speaker of the House of Representatives, Nancy Pelosi, has decided to go ahead and start the formal process based on the President’s attempt to blackmail the President of Ukraine. 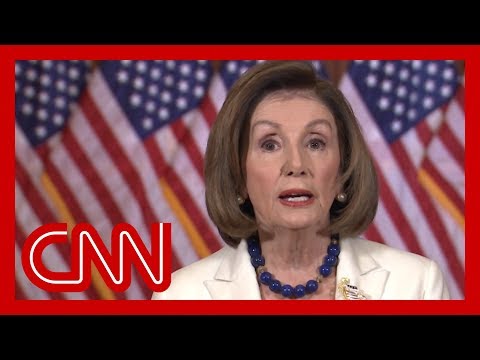 In the video, Representative Pelosi wraps the impeachment in the Declaration of Independence, the  Constitution, the rule of law, and the future of American democracy.

The response from the White House has been to ridicule the process, and to prevent people working in the administration to provide further information to Congress. This might actually open the President to further charges or articles of impeachment as he is clearly doing his best to hamper the investigation.

My distaste for President Trump goes well beyond the narrow issue for which the Democratic leadership will proceed with impeachment.

The man managed to win the election by playing on people’s fears and has pushed the american people apart by appealing to their worst opinions of each other. Instead of talking honestly about the economic and technological changes affecting the country, he has sold simple populist solutions which I doubt he and his advisors really believe in. In the international arena he has damaged the United States’ position in the world and turned his back on the climate crisis, which is clearly one of the largest challenges facing the world today.

The fact is that many people in the Republican Party would agree with me on these and other topics and one of my biggest disappointments is that they have looked the other way and supported this administration simply in order to stay in power.

Many Republican politicians, it seems, are also afraid that the President’s core supporters would turn on them if they did not roll over and continue to support his ill founded policies and poor choices for cabinet level appointments and other officials.

A few weeks ago I wrote a post explaining the impeachment process and re-iterated in another post on his possible re-election that it will be very difficult for the Democrats to get 20 of the 53 Republic Senators to break ranks and vote to impeach Trump.

Although he has refrained from saying so publicly, it seems likely that Mitt Romney will vote to Impeach. The Atlantic has recently published an insightful profile of the Senator from Utah and former presidential candiate who has been signalled out by Trump and subject to to a number of negative tweets.

My message to the republican party is that the Democrats have given it a perfect mechanism to get rid of Trump and take their party back to its much more sensible and measured roots. Issues such as environmental protection, support of NATO, international trade, and a balanced approach to immigration used to be mainstream Republican issues and have been attacked by this administration.

The case of the Ukraine is clear cut and the essential facts are not in question. If Mitt Romney and 19 of his colleagues were to say that their conscience forces them to vote with the Democrats then Trump will become the first U.S president ever to be removed from office and his political career will be over. This will probably hand the White House to the Democrats in 2020 but will allow the Republican party to re-build itself over the next few years and emerge as a force of moderation and reason in the future.

With luck the radical fringe which has emerged from the shadows and is the core of Trump’s support will go back to the side lines of the country’s political discourse. In the worst case scenario the Make America Great Again people will split off and form a 3rd party which might get some votes for a few election cycles form both parties but will at least allow the Party of Abraham Lincoln to stand for its core values. 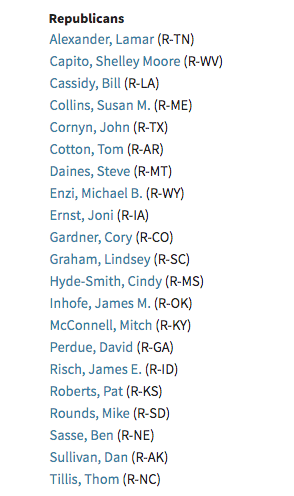 The alternative is to support this man who has violated most of the principals for which the party, and the 53 Senators in question, stand for. If he does go on to win re-election, then his brand of populist, xenophobic and protectionist policies will further define the party for many, many years.

This is a unique opportunity for Mitch McConnell and his Majority Whip, John Thune,  to take back control of their party. Such a move will surely cause a reaction in the home states of Republican Senators from Trump’s base of support. The issue is that if they vote with the President, their Democratic opponents will hammer them on the same issue in any case.

Just for the record, there are 21 Republican Senators up for re-election in 2020. Even if the Party as a whole chooses not to take this unique opportunity then I would suggest that these Senators look carefully at the polls in their states before deciding to support this man and his legacy.