As the impeachment process continues its course, Donald Trump has made two moves in the foreign policy area in an attempt to rally his Republican base and thus make sure that the Republican Senate does not choose to throw him out of office as I recommended a few weeks ago in another post.

One of those moves was to assassinate an Iranian General, Qasem Soleimani, while he was in Iraq. Regardless of Soleimani’s policies or the activities of the Quds force he commanded, the killing was clearly a violation of international law and went against years of American policy and restraint. Iran’s initial response was to launch a series of missiles against american bases inside Iraq and fortunately no one was killed int he attack allowing the situation to cool off a bit although Iran’s Defense Minister,  Amir Hatami, said the missile attack was “just a slap” according to the Times of Israel.

The other thing Trump did was to sign the first part of an accord with China on the trade conflict that he provoked two years ago. President Trump has argued that the partial agreement is the best deal ever as it commits China from buying more from the U.S. but its has been heavily criticized by media outlets across the political spectrum. The Wall Street Journal for example, said that it was unlikely that China could actually buy the stipulated quantities of agriculture products, energy and equipment and the New York Times thought the deal would actually drive the two economies farther apart. 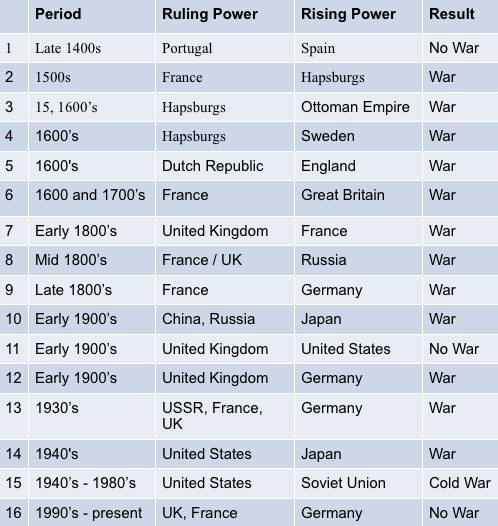 The bigger question is how will the relationship between the United States and China evolve over the next few years. Back in September I shared a post outlining the views of Niall Ferguson, a respected historian, that the two countries are already engaged in what he calls cold war 2.0.

Another historian, the former dean of Harvard Kennedy’s School, Graham Allison, coined the phrase The Thucydides Trap to describe the situation when a rising power threatens the dominant power in world affairs. Allison’s interest is in understanding the dynamics in the relationship between China and the U.S. and drew a parallel with the wars between Athens and Sparta which occurred between the years 431 and 404 BC documented by the Athenian Thucydides.

His research looked at 16 cases in history where a rising power makes such a challenge and explores the degree to which war in inevitable when it does. His team found that war did result in 12 of the cases but that 4 of them ended in accommodation. In the case of the United States and the Soviet Union the accommodation took the shape of the cold war and in Europe it became the European Union.

Allison’s sobering conclusion is that while war is not inevitable, accommodation is extremely difficult and that a series of events may lead the two sides into a devastating war that neither wants that will damage both societies and perhaps the world as a whole. Managing this relationship is one of the critical tasks facing the american government in the years and decades ahead and will require skilled leadership based on deep analysis.

The problem is that Donald Trump is not thinking deeply about the implications of his actions on the world stage. In the Middle East it is hard to imagine that his moving the U.S Embassy to Jerusalem, giving a blank check to Saudi Arabia in Yemen, abandoning the Syrian Kurds or assassinating Soleimani will make the region more peaceful or prosperous.

Likewise the deal with China does not promote free trade or remove tariff and non tariff barriers but simply sets high and perhaps unattainable targets many of which are still secret!

His approach to governing should concern every member of the U.S. Senate and they should remove him because he clearly went over the line in the case of the Ukraine and is, in any case unfit for office.