The good news is that a sensible and decent man has been elected president of the United States and that he will re-join the Paris climate agreement immediately after being sworn in as president on January 20th.

As of today, 188 of the197 parties to the convention have ratified it and submitted their first Nationally Determined Contributions (NDC’s) to reducing greenhouse gasses. The Marshall Islands and Suriname have actually gone ahead and submitted their second set of commitments as called for by the agreement.  All NDC’s are public and can be found here.

The United States, for example, committed itself to CO2 reduction targets for 2020 and 2025 in its first NDC submitted before the election of Donald Trump in 2016.

Surprisingly, after four years of the Trump administration’s systematic efforts to reverse the progress that the U.S. had made on the issue, the Energy Information Agency is projecting that the U.S. will emit an equivalent of 4.62 billion metric tons of carbon in 2020. This is 37% below the peak in emissions of 7,39 metric tons in 2005 and far faster than the commitments made as part of the Paris framework shown below.

Of course, the reduction comes mainly from decreased economic activity as a result of SARS-CoV-2 and the measures put in place in many states to try and control the epidemic. Assuming things get back to some idea of normal in the next year or two, the challenge will be to meet the 2025 targets or even go below them. 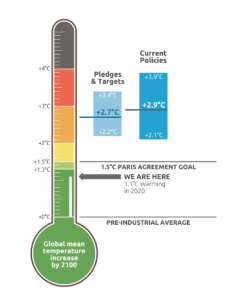 The bad news is that, according to the Climate Tracker,  even if the US does manage to maintain these reduced levels of Co2 and the rest of the world meets its own voluntary commitments, it will not be enough to halt climate change. The climate tracker is a consortium of research institutes and private companies that compares the current set of voluntary targets with the latest figures from the Intergovernmental Panel on Climate Change (IPCC).

Their “thermometer”, shows a 50% chance that the current set of targets will still cause a 2.7ºC warming (1.4 ºC more than today) by 2100 if the targets are not updated and made more ambitious.

Donald Trump’s rationale for leaving the agreement was about relinquishing American sovereignty to the United Nations and the agencies being set up to monitor the agreement.  What he seemed not to understand, or chose not to understand, is that the NDCs are voluntary targets and the entire Paris mechanism is about getting the world to cooperate rather than to dictate policies.

The essential idea is that countries will gradually make successively more ambitious targets as technology improves and time goes by. Transparency and sharing of technology, best practices, and investment funds will gradually shift the world onto a different trajectory and close the gap.

The Paris agreement was an important milestone in a series of meetings that have been held since 1992. These meetings are officially the Conference of the Parties to the United Nations Framework Convention on Climate Change (UNFCCC). Paris was COP 21 as it was the 21st such meeting in the 23 years since the agreement.

The next one, COP 26 will be held one year from now in Glasgow and will focus on encouraging all countries to agree on a goal to get to net zero in terms of carbon emissions at some point in the future and to agree to further voluntary targets by 2030.

The first point of Joe Biden’s climate plan is quoted below and is fully consistent with the goals of COP 26 and the consensus of the international community.

As I have written many times over the four years I have been writing Doing Business on The Earth, de-carbonization represents an enormous business opportunity. The combination of co-ordinated American action with China’s own steps to de-couple its economic development with its carbon footprint will push enormous investments into energy research, making our buildings and factories more energy efficient and transforming the energy mix itself.