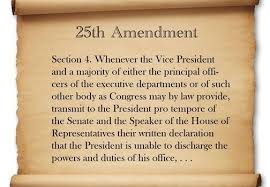 As I wrote in a post in January 2018, there is a clause in the 25th amendment to the United States Constitution which allows for the removal of the President if he is “unable to discharge the powers and duties of his office”.

By releasing a 46-minute speech on Facebook which falsely claims he won the election, not conceding the loss and spending much of the last few weeks playing golf rather than trying to help the United States in these difficult times, Donald Trump has demonstrated that he is unable to do the job he was elected for. The mainstream media, such as the Associated Press, has pointed out that Trump’s speech is full of lies and misleading data. Like other news outlets, the New York Times has reported that the legal challenges Trump has instigated have mainly been thrown out of court.

I urge anyone who has the patience to watch the full 46 minutes of Trump’s ravings as it shows the depth of his conviction that he really won the election, the lengths to which he is willing to go to confuse the issue or both.

His last card appears to be to hope for the U.S. Supreme Court to require a massive effort to verify the signatures of absentee ballots. As I wrote a few weeks ago, if these cases get that far, and I do not think they will, it will be a chance for the 9 justices on the court to show their quality.

One way to stop this madness would be for Vice President Pence and 8 members of the cabinet to invoke article 4. That would trigger Trump’s removal from office and then he would have to insist that he is, in fact, abe to continue his duties.

If I understand the process, and I am not a constitutional law expert, the ensuing mess would have to be sorted out by a two-thirds vote of the congress within 21 days.

This is, in my view, the last opportunity for whatever remains of the Republican party to stand up to Trump and the people who are colluding with him. According to the Daily Beast, a news website, the Vice President is very uncomfortable with the behavior of President Trump and is concerned that his own reputation will be tarnished by the end of the Trump administration.

Such a move would expose a sharp divide in the party and could, in the long run, allow it to emerge as a serious political alternative.

Even if the required two-thirds majority was not found, this process could take us up to the first or second week of January and it will at least minimize the damage that Trump and his cronies will do.

It will also allow solid and formerly respectable people such as Christopher Miller (defense), Eugene Scalia (labor), Ben Carson (housing and urban development), and others an opportunity to go down in history as doing the right thing at the end.

Readers of Doing Business on the Earth may remember that I made a very similar argument in favor of Republican Senators joining the Democrats to impeach Trump when they had the chance.

This they did not do and I suspect that the Vice President and the cabinet will also not heed this advice. What I do expect from Mike Pence is to attend Joe Biden’s inauguration on January 20th as suggested by an opinion piece in U.S.A Today.