During the first few months of the global pandemic, IESE Business School aired 44 webinars on Linked In,  YouTube, and on the website of La Vanguardia, a local newspaper here in Barcelona as a way of helping the international business community cope with the crisis. I moderated about half of the webinars and was the Academic Director of the series.

This experience gave me access to a wide range of thought leaders, academics, and business people as they managed the global pandemic which would go on to infect more than 80 million cases and kill around 1.8 million people so far.

In addition to the toll on human health and life, the pandemic and the measures taken by governments all over the world created the worst economic crisis since the great depression which began in 1929

According to the U.S. Department of Labor, the pandemic caused about 22 million people to lose their jobs in March and April. The International Labor Organization estimated that the worldwide impact was on the order of 145 million jobs in the same period.

Although the situation is far from resolved, I do feel that we can begin to see some of the key aspects of what many call the new normal and there are some signs that better testing, the natural evolution of the virus and the development of a number of vaccines and treatment options are all pointing towards an end to the emergency situation.

One of the most pressing questions is if and when these jobs will come back. Part of the answer can be found in an analysis done by two world bank researchers Besart Avdiu and Gauruv Nayyar.

Adviu and Nayyar used U.S. data to look at the degree to which different jobs could be done at home or not and also how much of the job was normally done face-to-face. Their results are shown below. 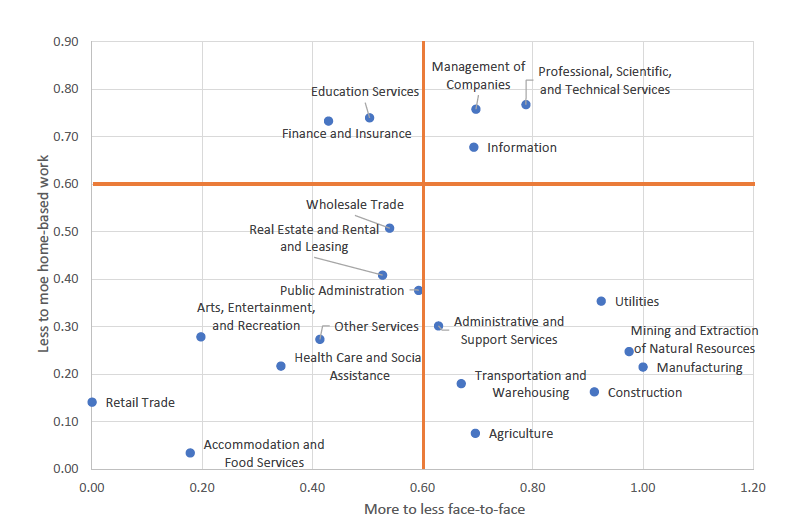 What I found most compelling was the idea that face-to-face and working from home do not necessarily go hand in hand.  It is, for example, difficult to work in manufacturing from home but there is little need for face to face interaction. Retail jobs, on the other hand, is both face-to-face and require being in the store.

In thinking about which jobs will come back and how soon, this framework can be helpful.

In the first place, those jobs that can be done from home will probably continue to be done online perhaps with people coming into an office once in a while. For those positions which have traditionally had a face-to-face component, such as teaching, my guess is that they will never go completely back to the way things were but will move in that direction as the virus is brought under full control and people become more certain of their personal safety.

Second, I would suspèct that the jobs which can not be done at home and do not require much face-to-face interaction will come back quickly although perhaps the protocols put in place during 2020 will remain for some time.

In the third place, my guess is those jobs that do require our presence and are also face-to-face will survive only if they are in critically important sectors such as health care or very special cases such as the arts, entertainment, and sports. Others will be automated or transformed over time.