Skip to content
By Julia Prats and Pau Amigó

Steve Jobs said once that his model for business was The Beatles: “They were four guys who kept each other’s kind of negative tendencies in check. They balanced each other, and the total was greater than the sum of the parts” (60 Minutes, CBS, 2003). This is also the idea behind Corporate Venturing, great things happen when different companies collaborate, in this case established corporations and startups/entrepreneurs.

At the roots of this collaboration is the broad concept of “Open Innovation”, coined by author Chesbrough. He described it in the first place as “a paradigm that assumes that firms can and should use external ideas as well as internal ideas, and internal and external paths to market, as they look to advance their technology,” (Chesbrough, 2003).

Years later, he redefined it as “the use of purposive inflows and outflows of knowledge to accelerate internal innovation, and expand the markets for external use of innovation, respectively” (Chesbrough, 2006).

Between the first and the second definition passed only three years, a sign of the speed of the changes in this field.

Certainly, we live in extraordinary times for entrepreneurship and corporate venturing, which are on the upsurge globally. Startups have seen opportunities arise and the entrepreneurial ecosystem has flourished in different countries.

At the same time, some corporations have learnt to build bridges with startups through Corporate Venturing as a route to become more innovative and overcome their challenges in achieving profitable growth. They did not want to let their inner inertia define them and came to the conclusion that collaborating with startups could be a good idea.

So what is Corporate Venturing exactly? We can say it is a part of a firm’s global innovation strategy consisting on a formula in which the corporation collaborates with startups through a wide range of tools and models that can give both sides incredible possibilities and results.

Why is Corporate Venturing relevant today?

The top priority for CEOs and executives around the globe remains how to drive growth sustainability and profitably. As the digitization increases its impact on industries in unforeseen ways, industries’ economics accelerate their transformation in exceptional ways.

In this context more than ever, companies must find ways to reinvent their business models to remain competitive if they do not want to risk being left behind. Developing and capturing external innovation remains a proven catalyst for achieving profitable growth and gaining competitive advantage.

However, there is consensus that corporations have difficulty integrating new business models into their business logic. There are successful startups in different industries that have challenged the existing business models and ultimately they have become today’s industry standards.

There are many such examples in technological and telecommunications industries, with the eruption of game changers such as Skype, Facebook and WhatsApp but it has also happened in more traditional industries such as accommodation, with AirBnB transforming the industry and having a perhaps unexpected impact on guesthouses and hotels.

In all these cases, change started with a minor, fringe use that has become much larger and more powerful over time, as we can see in the following figure: 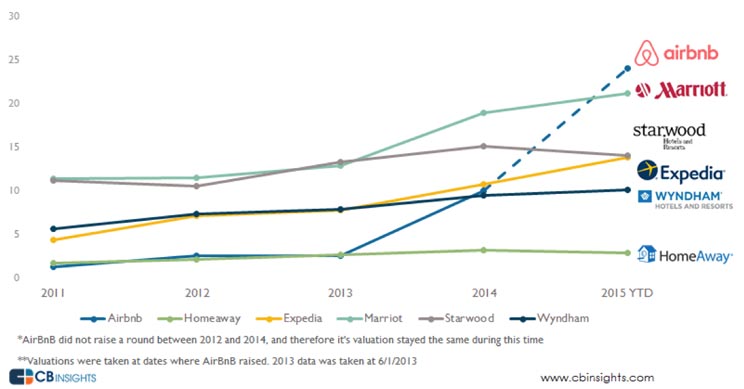 Hence, Corporate Venturing is more relevant than ever because it leverages the capabilities of startups and corporations to take advantage of the best of each world: “fresh” business models, technologies and inventions from startups and the experience of corporations to scale solutions and processes and reach new markets.

In today’s changing economy, company leaders must analyze carefully their environment to source external innovation beyond internal R&D and M&A activities. More permeability and interaction with what is going on around them is highly recommended, especially in cases where new business models and technologies are already challenging industry economics. And that is exactly what corporate venturing has to offer: a collaboration framework that acts as a bridge between innovative and disruptive startups and established corporations.

This posts are based on:  Corporate Venturing: Achieving Profitable Growth Through Startups

Mª Julia Prats is Professor and head of department of Entrepreneurship, and holder of the Bertrán Foundation Chair of Entrepreneurship at IESE. She holds a DBA in business administration from Harvard University, an MBA from IESE Business School, and a degree in industrial engineering from the Universitat Politécnica de Catalunya.

Pau is a Research Assistant at the Entrepreneurship Department where he focuses on projects related to entrepreneurship, professional service companies and profitable growth. He studied International Business at the Universitat Pompeu Fabra and has previously worked at Apple and Mango in the areas of sales and product management.

3 thoughts on “What is Corporate Venturing?”