A few weeks ago I saw Inside Out, the latest film from Pixar, which premiered in June. Inside the head of the protagonist, a young girl named Riley, five emotions—Joy, Sadness, Anger, Fear and Disgust—act as the governing body responsible for the decisions she must make in her life.

The premise of Inside Out is to make something tangible out of the psyche or emotional reality of a person. It also shows established behavior structures called “islands of personality“: Family Island, Friendship Island, Honesty Island, Goofball Island and Hockey Island. Off in the distance, separated by an abyss traversed by the train of thought, we see long-term memory, imagination, the film studio where dreams are manufactured and the subconscious.

To be as consistent as possible with what science has discovered about emotions, the film’s director, Pete Docter, sought the collaboration of two scientists, Dächer Keltner of the University of California, Berkeley, and Paul Ekman of the University of California, San Francisco. They give the disclaimer that humans have far more than five emotions, but admit it would have been impossible to tell a story with so many characters.

The impact of emotions on decisions

What Inside Out shows is the impact of emotions on our thoughts and decision making. Some scientists felt that the film should not have left out logical reasoning, one of the actors in the decision-making process. In the movie it is portrayed as a train of thought, which winds through Riley’s head with facts, opinions and memories, but does not affect that governing body driven by emotions.

It is still a challenge to integrate the mind and heart or develop an intelligent heart . Juan Antonio Pérez López, in his book Fundamentos de la Dirección de Empresas (Fundamentals of Business Administration), explains how abstract knowledge complements experimental knowledge, and empowers us with freedom to not always act on spontaneous motivation (fueled by experimental knowledge and emotions).

In this respect, freedom is the key player in decision making, which can use rationality (the first factor that inspires freedom) and choose what is best. By doing what we perceive to be the best choice, we are using virtuality (second factor through which freedom is exercised), and it is increasingly easier to make the decision that best suits us, since that action simultaneously becomes more attractive to the decision maker. Here’s the graph on the concept of motivational dynamism explained in the book by Pérez López: 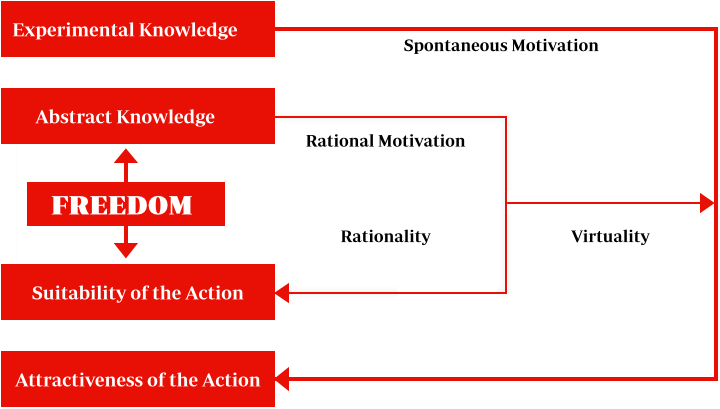 Inside Out also received some criticism in relation to memory. In the movie, memories are replayed by the protagonist as an untouchable video, while scientists say that memories are unreliable, and that we can manipulate them and insert memories of things that never happened.

According to Facundo Manes, director of the Institute of Cognitive Neurology (INECO) in Buenos Aires, “If I feel jealousy, admiration, resentment or anger, I cannot change my instinctive emotional reaction, but I can modulate the consequences of that reaction. We can change the way we think to change the way we feel. That is part of what cognitive therapy does: I cannot change reality, but I can change how I respond to it.”

I also liked Inside Out for its humorous portrayal of the differences between the male and female psychology, and the value it places on sincerity as a fundamental component of personality—without it “the train of thought” falls, which happens when the protagonist starts to lie—because it stresses the importance of not confusing facts with opinions and because it underlines the need for affectionate family bonds and friendship to shape our identity.

Nuria Chinchilla is professor in the Managing People in Organizations Department and director of the International Center on Work and Family (ICWF). An economist and lawyer by training, she holds a Ph.D. in Management from IESE. Her areas of specialization include women and power, family-responsible organizations managerial competencies, career and time management, interpersonal conflict and not-for-profit organizations. In 1984, she became a full-time member of IESE's faculty. Prof. Chinchilla is a business and government consultant and member of several Boards such as the VIP Board of European Professional Women's Network (EPWN).

One thought on “The Power of Emotions and Decision Making”

Leadership and People Management
As another month of home confinement to fight the COVID-19 pandemic comes to an end, many of us have probably come to terms with the situation, or rather, our handling of it. Some of us may even feel well adapted by now? Or did we just get accustomed to an ongoing struggle? Are the feelings…
Leadership and People Management
We are almost two months into the Coronavirus crisis since the WHO declared it a global health emergency on January 31st. By now, we are officially dealing with a global pandemic, which has become personally tangible to many of us. Around the world governments have been declaring a state of emergency, in Europe most borders…
Leadership and People Management
The Gallup report has dubbed Millennials as the ‘Job-Hopping Generation’, with high turnover rates and low engagement scores seemingly supporting such characterization of the generation. Indeed, the ‘job-hopping’ millennial is a common media portrayal, and academic evidence generally supports this reputation as well. Should we conclude that millennials as a generation are more fickle in…
Leadership and People Management
On Friday, January 31, the WHO declared the new coronavirus a global health emergency. By now, the virus has reached every region in mainland China and continues to spread outside China as well. Evacuation and quarantine operations of hundreds of foreign nationals from China are underway. Moreover, several countries reacted to the emergency by restricting…
Leadership and People Management
Some days ago we entered a new decade, the twenties. As the New Year and decade begins, it is interesting to reflect on the past ten years and make some predictions about the future. Here are some of my personal highlights: There was the internet, now there is AI and the GIG economy, when will…
Leadership and People Management
Who do you want to become when you grow up? Such a familiar question to many of us, I believe. This question suggests that one needs to decide early, and start moving towards the chosen direction as soon as possible. Indeed, achieving something great needs a lot of work, sustained focus and persistence, hence, the…
Leadership and People Management
Here is a puzzle: if an Ostrich, a Bird, a Frog and a Lizard are moved to a foreign environment, which one of them has the best chance of successful adaption and adjustment? Taken literally, the puzzle sounds like a case for environmental biologists… yet, let’s look at it metaphorically and explore the theme of…
Entrepreneurship
Today we are featuring an interview with Santiago Twose, MBA ’03 and CEO of a leading Spanish company providing outdoor GPS solutions: TwoNav. Coming from an engineering background, Santiago leveraged the IESE MBA to gain general management and entrepreneurial skills. After several years of international experience, he decided to join efforts in the family company…
Leadership and People Management
Radical change, such as through mergers or acquisitions, is integral to organizational life. Radical changes bring about qualitative changes in the ways people in the organization cognitively, emotionally and behaviourally interact with each other and the world around them. One increasingly common form of radical change in global organizations is replacing the native language of…
Sustainability
While Carlos Ghosn insists on his innocence and prepares for his day in court, Nissan chooses a new CEO and is in need of leadership at his time of uncertainty and change in the global automotive business
This website uses cookies to improve your user experience and to show you content related to your preferences. If you continue browsing, we consider that you agree to their use. AcceptMore Information