The agreement signed by the United States and Japan, the Trans-Pacific Partnership (TPP), which includes ten other countries, will represent 40% of the world’s trade volume. Given its scope, this agreement is a definite win for President Obama and Prime Minister Abe.

With this agreement, numerous measures will be adopted to foster trade between the member states: lower tariffs, easing of services and investment, more balanced legislation in areas such as intellectual property, between environmental protection, labor standards, etc.

As such, the TPP represents a victory over China in terms of geopolitics and geostrategy . The Asian powerhouse was looking to establish the ground rules of the global economic game with the recent creation of the Asian Infrastructure Investment Bank (AIIB), the bank of the BRICS (Brazil, Russia, India, China and South Africa), and the new silk roads.

Who sets the ground rules?

Although there is still a long way to go (the agreement must be signed and ratified by the respective parliaments), the TPP is aimed at containing the rise of China and its global influence, particularly in the Pacific region .

Fifteen months from the end of his second term, Barack Obama’s legacy is growing with the TPP now being added to the historic agreements reached with Cuba and Iran.

“When more than 95% of our potential customers live outside our borders, we can’t let countries like China write the rules of the global economy,” said Obama in unequivocal terms. “We should write those rules.”

Meanwhile, the Japanese Prime Minister stressed that the TPP “is the third arrow of Abenomics,” the name given to a set of economic measures promoted by Shinzō Abe to revitalize the stagnant Japanese economy. Abe, he explained, is hoping the TPP will increase the competitiveness of Japan’s economy following monetary and fiscal stimulus packages, and the structural reforms already implemented. 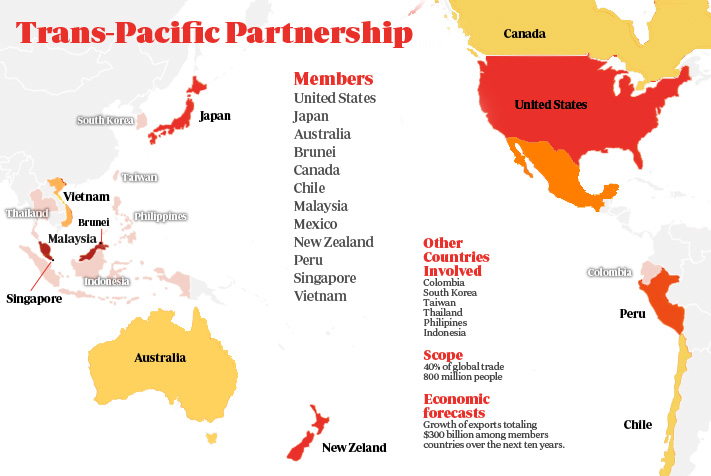 TPP: impetus for future agreement with the EU?

At the same time, this agreement could accelerate negotiations between the United States and the European Union to reach a new trade agreement, the Transatlantic Trade and Investment Partnership (TTIP), which is even more important, as it represents 60% of global trade.

If both negotiations prove successful, the United States will be sitting in a privileged position that would allow it to slow down China’s rise and lay the foundations for competing with the country on a global level.

Announcement of the agreement and of its terms aroused suspicion almost immediately, especially in the United States. First, there has been criticism about the secrecy with which the process was carried out. And that it particularly benefits large multinationals and the world of high finance.

Also, some feel it poses a threat to quality standards, which affects the environment and, above all, the US labor market. In fact, American trade unions are more concerned about the TPP than NAFTA (the trade agreement between the US, Canada and Mexico), championed in 1993 by President Clinton.

Now, with the TPP, politicians (mostly Democrats) and trade unions fear that the door will open to new offshoring, leading to lost employment in the US, wage reduction, or other consequences.

Víctor Pou is professor in the Department of Economics. He holds a Ph.D. in law, a B.A. in economics from the Universitat de Barcelona, an MBA from IESE and a post-graduate diploma on European integration from the University of Amsterdam. The extensive work he has carried out for the European Union is reflected in Prof. Pou's numerous publications on European integration and international relations.

One thought on “TPP: United States and Japan make a move”

Leadership and People Management
In a recent post I wrote about the research my colleagues and I conducted on inpatriation and knowledge transfer. Based on the research data we concluded that inpatriates contribute considerably to knowledge transfer and subsidiary development, leading us to recommend multinational corporations (MNCs) to view inpatriation from a more strategic perspective.  As a follow-up on…
Leadership and People Management
Although travel restrictions due to the Covid-19 pandemic are taking a toll on physically mobile people such as expatriates or migrants, the number of people working across national boundaries is nowhere near stagnating. In fact, studies such as the Santa Fe Relocation Global Mobility Survey 2020/21 suggest that the nature of global mobility is evolving…
Leadership and People Management
Many of us have grown up with respect and admiration for logic, reason, and rational thinking. Broadly speaking, Western educational systems aim at developing these exact skills and qualities, teaching us to think methodically, to organize, structure and categorize knowledge, to think in abstract terms and derive mental representations of different experiences. According to Ian…
Leadership and People Management
You have probably heard an old aphorism - Time is Money. Today, in the knowledge economy, it is more suitable to equate money with knowledge though. I believe that any contemporary economist would argue that knowledge (and technology) are the required components for enhanced productivity and economic growth. This premise holds particularly true for multinational…
Leadership and People Management
As 2021 is drawing to a close, we probably agree that we have been better adjusted and equipped for this second year of the pandemic. For one thing, there has been a global Covid vaccine rollout, which likely helped many countries across the world to manage the situation better and keep their economies relatively open.…
Strategy
Although the media reports that tens of millions of people are quitting their jobs, the real numbers appear to be that 5 million more people quit their jobs in the last 12 months than normally do so.
Entrepreneurship
The startup Swipcar, led by Julio Ribes (EMBA 16), presented at the 136th IESE Business Angels Network Investment Forum, and was invested in by a group of IESE alumni. Swipcar is a leading Spanish digital car subscription marketplace Based in Barcelona with growing presence in Italy and Portugal Offers a wide selection of cars for…
Leadership and People Management
Do you remember the TV series The Office? The American series aired in 2005, ran a total of 201 episodes, won several awards, and surely made it to the list of favourites for many viewers. Probably echoing the perceptions of many, I would argue that the series was indeed quite entertaining and funny, especially because…
Entrepreneurship
The adoption of corporate venturing has increased fourfold since 2016, encouraging new trends such as venture client, fund of funds, and corporate venturing squads. Recent data reports that the value of corporate venture capital deals has hit a record high in 2020, up 24% from the year before, with major investments into e-commerce and remote…
Entrepreneurship
IESE has joined the project GO-SME, funded by the EU program Horizon 2020, aimed at sharing the experience with the support of startups and small and medium enterprises and level differences in the form and quality of support across individual EU members. The GO-SME project brings together national and regional agencies supporting research and innovation…