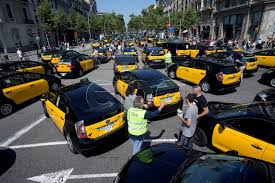 Barcelona has been shut sown by a Taxi strike which is quickly spreading to other cities in Spain and Europe. The origin of the strike is a ruling by a Spanish court that the compromise deal that the city struck between the taxi drivers and the city concerning the entry of Uber and its competitor Cabify in the city’s mobility market.

Personally I have been highly critical of Uber, Lift and other competitors using the same business model for the last few years due to what I believe to be a serious problem of fairness for taxi drivers.

Friends and colleagues have been telling me to just roll with the times and accept the fact that technology disrupts older business models and if the service was impeccable, then it would not have happened anyway.

As a Professor of Strategy, I do get disruptive technology and have a fairly good understanding of the mechanisms related to how digital technology is impacting many businesses. What I do not get is how civil society can break a social contract with tens of thousands of men and women who have invested their life savings in taxi licences without offering some kind of transition period or fair compensation.

The city’s idea was to limit Uber and its competitors to one license per 30 ordinary taxis essentially putting a cap on their development and giving the taxis time to implement their own improvements such as the dissemination of MYTAXI, an app which provides many of the benefits of Uber or Lift but connects users directly to fully licensed taxis.

I actually spent the last few days in Lisbon with my family and downloaded MYTAXI at the recommendation of one my daughters. Since I have never used Uber myself I was amazed at the incredible convenience that the system offers. Cars come when you order them and you can pay by credit card. The whole process is seamless, fast, and transparent.

“mytaxi has seen tremendous growth over the past 18 months. In 2017 alone, mytaxi provided 75 million trips (+337%) and increased its active passengers to more than 11 million (+194%). During Pinnington’s tenure, the company grew from a local player in Germany to the European leader in ride hailing services through strategic acquisitions and dynamic growth.”

For Daimler, MYTAXI is part of its new Mobility Solutions business in which it has joined forces with arch rival BMW. The hole involvement of car companies will be the subject of a seperate post in this series.

Going back to the current situation, for reasons that are not clear to me, the Spanish authorities challenged the arrangement in court and a judge suspended it as a cautionary move provoking the taxi drivers rage.

The deeper issue is the tragic story that has played out in cities around the world as Uber and its competitors have expanded their reach.

New York City, for example, introduced the medallion in 1937 to regulate the number of private persons offering rides in the city. The essential idea is that the person who acquires the medallion or licence agrees to provide a public service to the city’s citizens and visitors and also agrees to a series of conditions such as insurance, inspections, etc.

Over time, the value of theses licences, which typically have a limited number, rise and thus taxi drivers, or entrepreneurs invest in the licences with the idea that they will be worth more money at a future date and they make it possible for a taxi driver to make a living.

Enter Uber, Lift and others who provide a similar service with little or none of the same requirements and no medallion or licence. In city after city the value of the licences has collapsed putting tens of thousands of drivers at the edge of bankruptcy and beyond.

This is what the taxi drivers are fighting and while I am shocked at the impact the strike is having on families at the airport, in my view civil society has a debt to these people and needs to provide them with fair compensation, time to adjust or both.

Leadership and People Management
Expatriate experiences, and adjustment in particular, have been one of the most prominent research topics in the field of global mobility. Rightfully so, given the multitude of challenges that expatriates face, such as increased job responsibilities, excessive travel, major life changes, and dealing with cultural others. Industry surveys (e.g. Santa Fe Relocation) indicate that many…
Leadership and People Management
Since the beginning of the war in Ukraine, Europe has been facing the fastest growing exodus of people since World War II. It is estimated that by now there are millions of refugees who have crossed Ukrainian borders, and many more people who had to relocate within the country. Refugees, by definition, are people who…
Leadership and People Management
Some time ago, when the Covid crisis unfolded, I wrote about global leadership lessons, as such instances of global disruptions have the capacity to reveal how leaders operate and who they really are. Currently, we are into the fourth month of Putin’s war in Ukraine. Zooming out from the real suffering and emotional burden of…
Leadership and People Management
In a recent post I wrote about the research my colleagues and I conducted on inpatriation and knowledge transfer. Based on the research data we concluded that inpatriates contribute considerably to knowledge transfer and subsidiary development, leading us to recommend multinational corporations (MNCs) to view inpatriation from a more strategic perspective.  As a follow-up on…
Leadership and People Management
Although travel restrictions due to the Covid-19 pandemic are taking a toll on physically mobile people such as expatriates or migrants, the number of people working across national boundaries is nowhere near stagnating. In fact, studies such as the Santa Fe Relocation Global Mobility Survey 2020/21 suggest that the nature of global mobility is evolving…
Leadership and People Management
Many of us have grown up with respect and admiration for logic, reason, and rational thinking. Broadly speaking, Western educational systems aim at developing these exact skills and qualities, teaching us to think methodically, to organize, structure and categorize knowledge, to think in abstract terms and derive mental representations of different experiences. According to Ian…
Leadership and People Management
You have probably heard an old aphorism - Time is Money. Today, in the knowledge economy, it is more suitable to equate money with knowledge though. I believe that any contemporary economist would argue that knowledge (and technology) are the required components for enhanced productivity and economic growth. This premise holds particularly true for multinational…
Leadership and People Management
As 2021 is drawing to a close, we probably agree that we have been better adjusted and equipped for this second year of the pandemic. For one thing, there has been a global Covid vaccine rollout, which likely helped many countries across the world to manage the situation better and keep their economies relatively open.…
Strategy
Although the media reports that tens of millions of people are quitting their jobs, the real numbers appear to be that 5 million more people quit their jobs in the last 12 months than normally do so.
Entrepreneurship
The startup Swipcar, led by Julio Ribes (EMBA 16), presented at the 136th IESE Business Angels Network Investment Forum, and was invested in by a group of IESE alumni. Swipcar is a leading Spanish digital car subscription marketplace Based in Barcelona with growing presence in Italy and Portugal Offers a wide selection of cars for…