On a slow morning in the New York subway, you can read through the handful of billboards that decorate the wagon. This past month, we could only see the podcast startup Luminary’s advertising, covering New York City’s subways. With its bright yellow banners and its enticing slogan (“Original podcasts with original ideas for original people,”) Luminary entered the podcast industry in late April. But, while this competitive ecosystem has traditionally promoted an ad-based open source business model, Luminary aims to become the Netflix of podcasting—the consumer pays.

When Luminary announced its launch, the startup had already raised $100 million in venture capital—the most substantial amount of cash a single podcast startup has ever garnered, according to the podcast expert Nicolas Quah. In the subscription-model era, in which newspapers put up paywalls and a dozen streaming platforms fight over your monthly $9 fee, Luminary’s premise seems simple. It’s a paid subscription business with original and quality content. At first glance, the only difference with Netflix is the product—podcasts instead of TV shows,—but that makes all the difference. Through Luminary’s app, consumers can access its ad-free exclusive roster for $7.99 a month. The company also offers dozens of third-party podcasts (with ads.) During its launch, this free-tier got a lot of backlashes as it featured content from other companies without licensing it (The Daily from the New York Times was pulled from Luminary but is now in talks to distribute it through the app.) The app wanted to hook listeners through the free content to get them to pay for the exclusive material. 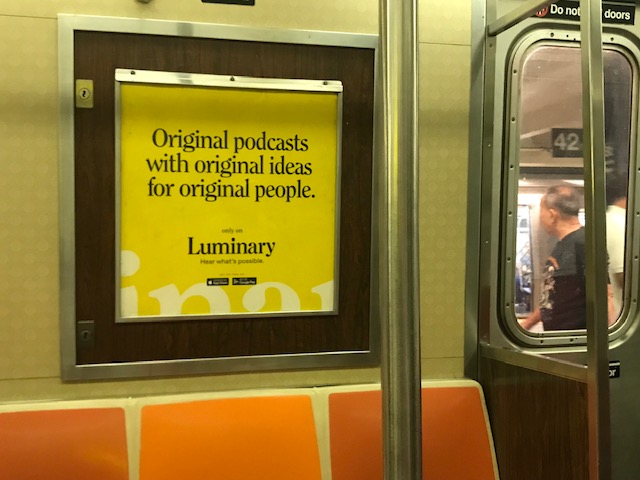 In 2019, podcasting is entering adulthood. The advent of the Internet and the pervasiveness of blogging brought about a new form of radio in the 80s and 90s—audio blogging. But it was not until 2004 that podcasting became a medium on its own right. As it was born out of the Internet, the podcast industry grew up with an open source mentality—the content was free, and the only way to generate money was ads. In 2019, the podcast industry in the US has left its childhood behind, entered the lives of millions of Americans and is starting to question the ad-system. Pew Research Center reports that 24% of Americans aged 12 or older listened to a podcast in the last month, while in 2008 that percentage was only 9%. Moreover, in 2019, more than half of Americans under 35 listen to podcasts every month, according to the Reuters Digital News Report. The market is there; millions of consumers download podcasts every day. For podcasting, the ad-based model has worked so far. This year, the industry is expected to generate $514 million in advertising—$659 in 2020, according to the Interactive Advertising Bureau and PwC. The sums are optimistic, but as the number of podcast platforms increases, the advertising pie gets further and further divided, and other revenue sources come into play.

Moreover, ad dollars are not reliable; they depend on the returns. For an advertising revenue model to work, the media company must guarantee three things: one, consumer targeting—we know who is listening and what products appeal to them,—two, the consumer sees/listens to the ad—it is hard to ignore them,—and three, the content reaches a sufficient amount of people so that the advertising company sees returns. However, in podcasting, consumer targeting can be hard (we don’t know how many people are listening) and, in most platforms, the listener can easily skip the ad. In this context, Luminary’s proposal seems logical, but it also betrays the essence of podcasting (it is no longer free.)

On the other hand, paywalls can become more reliable (users pay for content they consume and value.) Getting paying customers is the hardest part of the business, and only two things matter—quality content and good marketing.  Luminary has gone out of its way to create a unique content portfolio with Lena Dunham, Trevor Noah, Karamo Brown, the podcast Slow Burn and other partnerships with, for example, New York Magazine. Still, if they want customers to pay more than a month of subscription, Luminary must continuously be updating its content, releasing new shows and increasing its production budget. At the same time, Luminary has launched an aggressive advertising campaign: you can see the ads on social media, on buses and subways in New York and Los Angeles, on billboards, and even on other podcasts.

Even if Luminary gets a consistent customer base, the company has entered an overcrowded industry. Apple dominates the market as it controls distribution through iPhones; Google has introduced a podcast service;  Spotify is starting to grow (read Spotify wants to control the podcast industry.) The Swedish company is investing almost $500 million in podcasting, by acquiring the podcast studio Gimlet Media, the podcast creation app Anchor, and the crime and mystery network Parcast. Furthermore, The New York Times and other news outlets have their own, and top-rated, podcasts. Most podcasts are free and have ads, although Spotify does offer the paid subscription for $9.99 per month with unlimited music as well. Competition is harsh and for a paywalled company, even sharper.

The paradigm for OTT TV shows—exclusive ad-free paid content—has not reached the podcasting industry just yet. Luminary aims to shift the business model, disrupt it, and get a piece of the pie. It is too soon to tell whether the app will achieve its goals or fail under the pressure of intense competition, flaky listeners, and a customer base tired of paying for multiple platforms every month. Luminary promises change, but the big podcasting streamers like Spotify and Apple control distribution; and the industry is crowded, competitive, and fiercely ad-based. For now, we can stare at Luminary’s yellow billboards on the subway and decide whether we want to pay $8 for “Original podcasts with original ideas for original people.”

2 thoughts on “Luminary dreams of becoming the Netflix of podcasting”