The Internet and the accessibility of technological devices seemed to be the perfect formula to break the educational and cultural barrier that has historically marked differences between diverse social classes. Having all the world’s information accessible at a single click appeared to be the perfect solution for everyone to access universal learning. Over the past few years, the digital divide has been decreasing, becoming smaller and smaller in most developed countries. But there is still a lot of work to be done. According to economics expert and consultant Bhaskar Chakravorti in his study on the US ‘Turning America’s Digital Divide into Digital Dividends’: “As more than 55 million students moved to online learning during the pandemic, one in five teens, ages 13 to 17, reported being unable to do their homework ‘often’ or ‘sometimes’ because of unreliable Internet access”. As a reaction to these and other similar news, President Joe Biden created a plan at the end of last year with a budget of 65 million to try to close this divide once and for all. 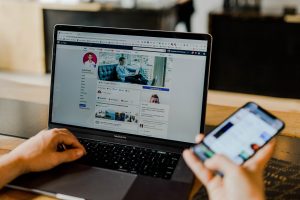 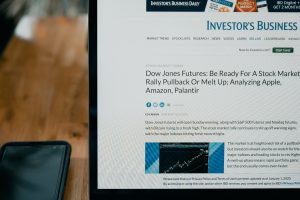 Photos by Austin Distel and Tech Daily by on Unsplash

While efforts are still being made to narrow existing gaps, there are othes that are rapidly looming. “News or social media? Socio-economic divide of mobile service consumption” is a study conducted by Universidad Carlos III de Madrid (UC3M), the IMDEA Networks Institute, and Orange Innovation, that warns that a new usage divide is emerging. And what is this new usage divide? It is the difference in Internet usage among people based on economic resources and level of education. The study, published in the Journal of The Royal Society Interface, is based on the telecommunications records of 45 days, between May and June 2017 provided by Orange France. Within this month and a half, 3.7 billion geolocated mobile traffic records generated by different apps, such as Netflix, Twitter or Facebook were collected.

The conclusions of the study show that there are major differences in internet usage among people with different levels of education and economic capacity. The level of education is what holds the greatest impact. Applications such as Facebook, Facebook videos and Google Play are examples of the highest negative correlation with variables ‘higher education’ and ‘average income’. On the other side, News, Audio Streaming, WhatsApp and Google are the apps with the highest positive correlation with the higher education variable. The same is true for the variable ‘average income’ for News consumption and the use of the Apple Store. The two variables are closely related but at the same time have their slight differences.

If we talk about divides related to the usage of digital technologies, we must undoubtedly consider the generation gap. In this sense, the US Media Consumption Report 2021 conducted by the consumer research platform Attest is remarkable. Observing the data presented in the study, it can be concluded that although it is gradually disappearing, the generation gap is still a reality. The study shows that the age range between 57 and 65 is the most affected by said gap. In most of the different services studied, when compared to the rest of the age groups these are the users that use the internet the least, with social networks being the functionality they use the least. In contrast, it is the age group that consumes more digital newspapers versus printed paper; even this age bracket is abandoning conventional newspapers.

Many researchers are trying to understand the reason for this divide. According to Esteban Moro, PhD in mathematical engineering and author of the usage gap’s study, in statements to Newtral, a Spanish media startup, he concludes that the reason for these differences on usage by educational level and income is simply related to comfort. Each of us is comfortable in a social and cultural environment unavoidably influenced by many internal and external factors, and it seems that a similar thing happens in digital consumption. In sum, many social, cultural, and anthropological questions that are difficult to address would have to be answered to understand this gap. Regarding the generation and digital divide, there are more concrete solutions, such as Joe Biden’s plan to reduce the digital divide or the European Digital Education Action Plan which, among other objectives, aims to reduce the generation gap. These plans are already being implemented so that both gaps disappear and thus achieve the real democratization of the Internet. Observing the different studies, we can see that the different gaps are still a reality and must be taken into account to achieve equality in access to information. At the same time, we must not forget that we must be aware that when we try to close some gaps, others open up. We must try to be one step ahead to avoid greater evils.